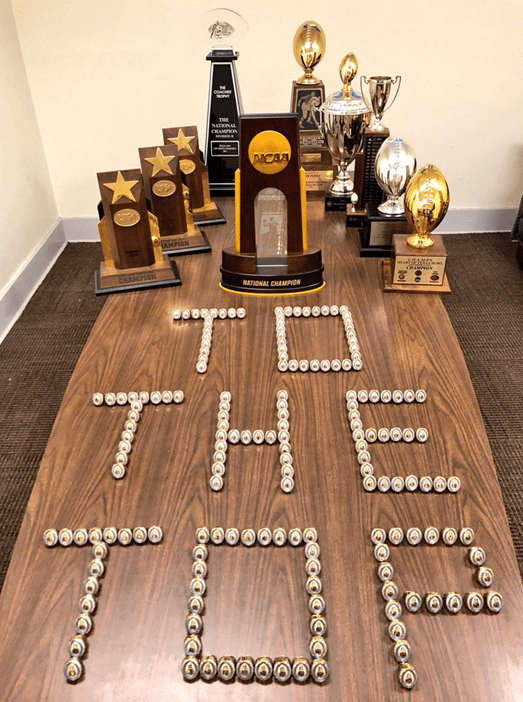 Greetings, Lion fans, just when you thought the season ended that November afternoon in Stephenville….well, to borrow a line from the movie Top Gun, “Negative, Ghostrider, the pattern is full.”

Yes, Lion fans, now is the time for the next best thing to the regular season- Recruiting. We here at The Wire have been wondering along with the rest of you just who Coach Baliff and his staff are looking at bringing on board the Lion Express. After an early period of JUCO and other transfers, we have a better idea. We’ll also take a look at a couple of Texas high school recruits, one that the Lions have offered, and one that’s unbelievably flying under the radar, but when I’m through here, you’ll know who he is, and we’re willing to bet that you, the reader, will wonder why this player is not on more lists.

With that said, let’s get to it. First, the JUCO transfers:

Armando Herrera, QB- 6’0″ 187 lbs., San Bernadino Valley College-One of the all time leading passers at SBVC, Hernandez, is very similar to best signal caller to ever wear the blue and gold, Luis Perez.  Hernandez is very mobile in the pocket, while always keeping his focus downfield, and throws a very catchable ball. He has a very quick release. He is cool under pressure, and doesn’t get rattled.

Randon Haynes, DL-6’5″ 345 lbs., Tyler JC(Waxahachie HS)-Simply put, this guy is a beast. He has good technique, uses his hands well, and doesn’t rely on his size and strength to fight off blockers. He’s not very fast, but quick, and has a fast motor. Double and triple teamed most of the time, he’s able to fight off the block and get involved in the play.

Cameron Coleman, WR-6’2″ 180 lbs., Mt. San Antonio College-Very exciting player, Coleman has some SERIOUS SPEED.  Very fast, with soft hands, he is a very good route runner. He has the chance to go the distance every time he touches the ball. He’s very effective from either the wideout or slot receiver position. He would be a real threat for Baliff’s offense especially on the jet sweep, jailbreak, or tunnel screens. This is an excellent pickup for the Lions.

David Tolentino, DB-5’11” 182 lbs., Yuba College-Good speed and quickness, has good technique, and is a solid tackler. Appears to be a good fit as a nickel or dime back, and would be excellent in kick coverage.

With Signing Day in early February, there are no definite commitments yet, but the Lion Staff has been very busy, and have made numerous offers. There is one target that stands out, and we wanted to let our readers know about him.

Kevin Gilliam, S, CB, LB-6’1″180 lbs., Galena Park(North Shore HS)-A standout defensive back on the Class 6A State Champions, Gilliam plays both corner and safety, and was placed in one on one coverage almost exclusively. He has the speed to run with receivers, and has good technique, as well a solid tackler. A&M-Commerce is his only offer so far.

Kamden Perry, WR, 6’0″ 176 lbs., Longview-A driving force on the 6A Division 2 State Champion Lobos, Perry has only four offers-ACU, Alcorn State, Northwestern State, and Incarnate Word. He has the speed to run by defenders, yet also is a great route runner with soft hands. A fierce blocker, he also has the strength to break tackles. This would be a huge get for the Lions. (Note: A tip of the hat to former Lion great Fred Woods for bringing him to our attention)

Well, there you have it, Lion fans. Of course, we’ll know more come Signing Day, but the staff here at The Wire will keep tabs on all the happenings, and will fill everyone in on the 2019 signees.