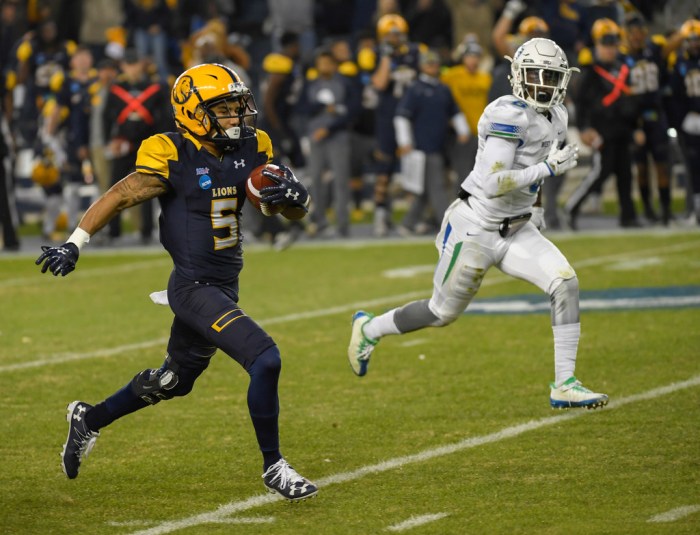 Greetings Lion fans, after a workman like victory over William Jewell, the Lions return to Lone Star Conference play with a trip to Portales and the Greyhounds of Eastern New Mexico.

This week’s column will have a little more of a familiar look to it, as we are starting to accumulate some tendencies and statistics upon which to build an analysis of things. So let’s get to it….

As far as turnovers go, the Greyhounds have 1 quarterback sack, while forcing 2 interceptions and 1 fumble. The Lions have lost 3 fumbles(one of which was a muffed punt return), and 3 interceptions.

CAST OF CHARACTERS-In what has become a recurring theme of Colby Carthel coached teams, there has been a good balance so far this season. Marquis Wimberly leads in receiving with 15-140, with 2 touchdowns. Chance Cooper has 11-138, Matt Childers 9-121 with a TD, and Mr. Reliable, Vincent Hobbs, 9-59 with a TD.

Carandale Hale leads the rushing attack 25 attempts for 114 yards, and Ovie Urevbu with 22 attempts for 88 yards. The Lions should receive a boost this week with the return from injury of power runner EJ Thompson.

The Greyhounds are led by linebacker Brad Hardin with 13 tackles, 2 tackles for loss, cornerback Ricky Barfield with 9 tackles, and Noah Sweitzer with 7.

THE BOTTOM LINE-The Lions hold a decided advantage here. The Greyhound defense is undersized, and have surrendered over 30 points per game in two losses.

The Lions have sputtered at times so far this season. While the offensive line was much improved in their protection of Wheeler, and opening up holes for the running game, Wheeler has struggled with consistency so far. After a blistering first half last week, the Lion offense managed just three points in the second half. A determined defensive effort and clutch kicking from Kristov Martinez made the difference. Now is the time for the Lions to put together a complete game offensively. The competition is going to stiffen very soon.