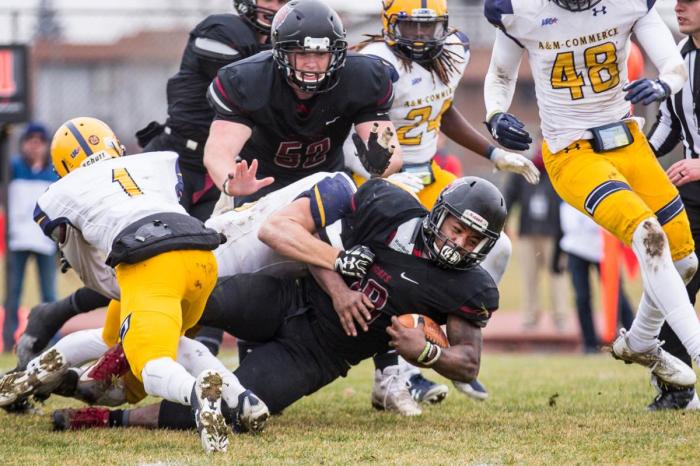 Greetings, Lion fans, and in this edition of the Notebook, we’ll break down what again is the stiffest test for the Lions so far this season, the Regional Final against the top seeded Minnesota State Mankato Mavericks. First, though, let’s take a look at just how good this defense has been lately.

To start the Blue Gang has given up one touchdown in the past three games. ONE TOUCHDOWN. The level of competition? A third ranked and seventh ranked team, plus one ranked in the top ten in region for most of the regular season. These teams were averaging close to 500 yards per game, per team. The staff here at The Wire has been around the program for a long while, and we’ve seen some of the greats. Bagsby. Wilson. Mason. Kirk. Buckley. Ray. Woods. While not having any real individual stars, this group has made stopping opposing offenses a team effort.

It’s not easy coaching or playing defense in today’s game. With rules changes favoring the offense and increasing scores, as well as what some would say are rather loose interpretations of pass interference, facing bigger and better offensive lines and running backs, defenses in college football today are under increasing pressure.

That’s what has made this stretch of football for the Lion defense so special. They seem to be peaking at just the right time. And they’re doing it with another new defensive coordinator in Xavier Adibi, a new system, and new terminology. The defensive staff has sold it, the players have bought in, and all that hard work in those hot August days are beginning to pay off. Let’s now take a look at just what they will be facing this week in the Great White North.

It is a situation, and type of foe that the Lions are familiar with. Tarleton State is very similar, with a big offensive line averaging 300 lbs., and  265 yards per game rushing. In their first round victory, the Blue Gang held them to 56 yards.

The Lion defensive line is paced by red shirt junior Elijah Earls, 6’0″ 240 lbs., who has 9 sacks this season, including 3.5 last week, and red shirt junior Jaylon Hodge, 6’0″ 275 lbs., who has 7 1/2 sacks on the year. Senior tackles Chris Williams, 6’1″ 295 lbs., and Pierre Leonard, 5’10” 300 lbs., hold down the middle of the defensive line, and make life very difficult for opposing offenses to establish any kind of running game between the tackles.

Senior linebackers Terrell Collins, 6’0″ 245 lbs., and Neema Behbahani, 6’1″ 230 lbs., keep making plays all over the field, and supplement the great defensive line play with the occasional blitz. Collins leads the team in tackles 85(35 solo), and Behbahani has 50(20 solo).

The biggest challenge the Lions front six will face this week is not allowing that big offensive line to get a clean angle blocking, and make the Mavericks more of a one dimensional passing game, which is something they do not want to do.

The Maverick passing game is much like Eastern New Mexico. They are a run first team, and like to hit their opponents with the deep ball.

The Mavericks are primarily a drop back, play action type of passing attack, but they will mix in a bit of bootleg action, and will roll the pocket, much as Mines did last week.

The Lions back line is together again, and healthy. red shirt junior Dominique Ramsey, 5’9″ 180 lbs., returned from injury last week, and stepped right in without missing a beat. Senior corner LA Dawson, 6’1″ 180 lbs., had a key fumble recovery in the end zone for a touchback that stopped an early Mines scoring threat. Red shirt senior Jalon Edwards-Cooper, 5’11” 175 lbs., the second leading tackler on the team, with 63(45 solo), and had a pair of tackles for loss last week. The question for the back line this week-can they control a potent Maverick running game, while limiting the big play opportunities of Mr. Everything for Mankato, Shane Zylstra?

VERY SPECIAL, INDEED-The Mavericks are breaking in new kickers this season. Gone is one of the best kickers in school history Casey Bednarski, and stepping into his shoes is sophomore Ashton Garner, who is a very good 10 for 12 in field goals, with a long of 43 yards. Fellow sophomore Luke Williams is the punter, averaging 31.5 yards on 16 punts, with a long of 45 yards.

Speaking of the Lions return game….welcome back, Dominque Ramsey! Effective directional punting limited Ramsey last week, but he had 2 returns for an average of 22 yards. He has been arguably one of the most electrifying returners in all of Division 2, averaging. 13.2 yards per punt return, with a long of 55 yards and a touchdown, as well as a 35.0 yard average in kick returns, with a touchdown, and a long of 91 yards. Red shirt junior Kader Kohou, 5’11” 190 lbs., in addition to his outstanding play in the back line, has been a real threat on returns as well, averaging 18 yards per punt return in the first round win over Tarleton.

WHAT’S GOING DOWN/THE VERDICT-No, Lion fans, there has not been some sort of strange time warp. Yes, the Lions are back in the regional finals of the Division 2 playoffs, and once more, they make the trek north to Minnesota to face the Mavericks of Mankato.

Some of the Maverick players have changed, but two things remain the same. They are unbeaten, and they are still a big, physical, run heavy type of team that will wear an opponent down, then run them over. They are an experienced playoff team. This will be the third consecutive year the Mavericks have reached the regional final.

The Lions, however, present a challenge that Mankato has not faced this year. This is a team that is just as experienced,  that has played before large, hostile crowds on the road, in all sorts of weather.

The difference is this Pride of Lions as opposed to past years is this. They have developed a edge and toughness, evidenced by a rushing attack that has averaged almost 173 yards per game that has enabled them to dominate time of possession, and wear on opponents themselves. Quarterback Miklo Smalls has been nothing less than outstanding, forcing defenses to account for him on every play. Add to that a defense that has literally shut down teams for three consecutive games now.

This is a team the Lions match up very well with. As previously discussed, the goals remain the same for the Lions, distilled down into two thoughts: 1. Play Your Game. 2. Hold Onto The Ball.

This is another very winnable game, Lion fans. The team is peaking at just the right time. One more time, I ask……WHY NOT US?