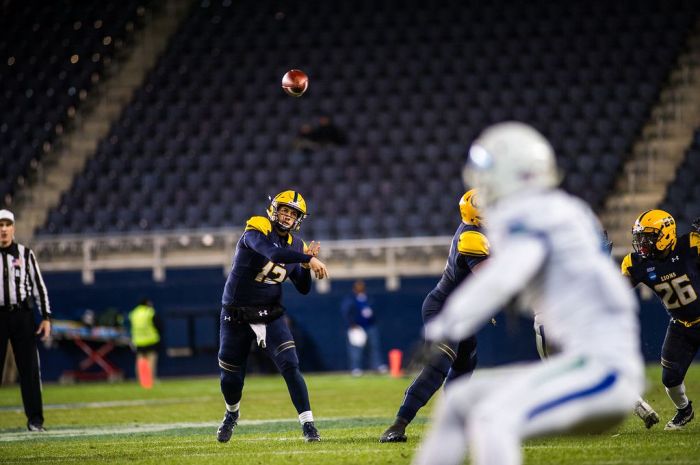 Greetings, Lion fans, and it is a wonderful thing to be playing football at this time of the year. The Lions are back in the regional final, and as the Hall of Fame catcher Yogi Berra said, “It’s deja vu all over again”. A true statement in more ways than one. The Lions face another undefeated team, the top ranked team in Super Region Four, and another familiar foe, the Minnesota State Mankato Mavericks. Before we take a closer look at this week, let’s take a look at how David Bailiff and his team got to this point.

This playoff run can be summed up in one word: Defense. The Lions were outstanding again in a defeat of third seeded Colorado School of Mines, 23-3. The Blue Gang totaled 6 turnovers, two inside their own 10 yard line, and accounted for ten sacks. Yes, you read that right…10 sacks. Red shirt junior defensive end Elijah Earls, 6’0″ 240 lbs., led the charge with 3.5 sacks, and red shirt sophomore transfer Mark Brown, 6’3″ 225 lbs., had a pair as well. The Lion defense shut down a team averaging 43 points and almost 500 yards total offense per game. Just how good have they been recently? in the past 12 full quarters of football, the Blue Gang has surrendered one…that’s correct, ONE TOUCHDOWN. This is the definition of what my colleague Billy Minor calls “Championship Level” defense.

The Lion offense was outstanding again as well. The offensive line paved the way for 172 yards rushing against a team that was only giving up 72. Red shirt sophomore quarterback Miklo Smalls, 6’2″ 185 lbs., was the star again, accounting for 323 yards of total offense, and a spectacular 64 yard touchdown run in the first quarter that turned out to be the game winner. True freshman Spencer Long, 5’11” 200 lbs., in addition to his fine work on special teams, had 4 rushes for 44 yards, including a 40 yard burst up the sideline that set up a Jake Viquez field goal that was icing on the cake. Senior tight end Tyler Guice, 6’3″ 250 lbs., had 2 catches for 46 yards, but none bigger than a 34 yard strike from red shirt senior Preston Wheeler, 6’3″ 200 lbs., on a fake field goal attempt that really took the wind out of the sails of the Orediggers.

There’s no time to rest, though. The Lions face another big challenge in the Land of 10,000 Lakes. Let’s take a closer look at our purple and gold clad friends from Mankato:

AT FIRST GLANCE-The Mavericks are champions of the Northern Sun Conference, ranked #2 in the country, and #1 in Region Four. They are undefeated with a record of 12-0, but upon closer examination, that record is not quite what it seems. The collective record of Mankato’s schedule is 67-69, having faced 7 teams with winning records.

The record of the Lions collective schedule is 87-52, and they have faced 8 teams with winning records. and have defeated the number 2 and 3 seeds in this region. They come into this game with a record of 11-2, and riding a six game win streak. It is shaping up to be a real battle.

The Maverick defense operates out of a base 4-3 set with more zone coverage in the secondary than man to man. They are very good at stopping the run, and are not afraid to take chances by cheating a safety down close to the line of scrimmage, and will bring a variety of blitzes. They present a real challenge.

It is a challenge that the Lion offensive line has faced many times before. This group, led by red shirt junior Amon Simon, 6’5″ 290 lbs., and red shirt junior center Christian Hernandez, 6’1″ 285 lbs., have faced just about every pressure package opposing defensive coordinators from some of the best Division 2 programs in the country , and still have enabled Miklo Smalls to have an MVP type year, and opened up running lanes for red shirt junior Antonio Lealiiee, 5’11” 210 lbs., who began the year fourth on the depth chart, and converted linebacker Jemal Williams, a 6’0″ 190 lb. sophomore, and provided with a luxury they haven’t enjoyed recently….a real running threat to balance the offense.

MOVERS AND SHAKERS/THE BACK LINE-The Maverick back line is led junior safety Cole Schrodermeier, 6’0″ 185 lbs., who had 49 tackles on the year (40 solo). He also has a team leading 4 interceptions, returning one for a touchdown. He is joined at the safety position by another player with good size, 6’1″ 200 lb. junior Cade Johnson. They are both very good in run support. Senior Parrish Morrow, 5’10” 180 lbs., and fellow senior Jack Curtis, 6’1″ 175 lbs., hold down the corner spots.

The Lions, however, give the Mavericks a dimension that they haven’t faced before. A true dual threat quarterback that they have to account for. Miklo Smalls is a deadly accurate 222-335 on the year for just over 227 yards per game, with 22 touchdowns, and a long of 78 yards. He also has 647 yards on 122 rushing attempts, with 3 touchdowns, including the 64 yarder last week that started the Lions scoring against Mines. He forces defenses to defend all 11 players. That means that there has to be a spy defensively that takes away the safety in run support, or forces zone coverage instead of man.

VERY SPECIAL, INDEED-Jake Viquez was money again, despite having an early field goal blocked, connecting on his only other attempt from 31 yards in a tricky wind, which he’s sure to face again this week in Minnesota.

Andrew Gomez just quietly hums along at punter, averaging 40.3 yards on 37 punts. He continues to disrupt opposing return games, and has been very effective in handing adverse weather conditions.

WHAT’S GOING DOWN-Aaah, the joys of playing in December. It’s become familiar to the Lions. For the second time in three years, the Blue and Gold is back in the regional final, and, as usual, they’re on the road again. And in what must seem like an episode of Rod Serling’s Twilight Zone, they”re back in Mankato, Minnesota, facing another big and talented Maverick football team.

Yes, the Mavericks are one of the top teams in the country, undefeated, and the top seeded team in the region. Familiar territory to the Lions. They have already defeated the two and three seeds, and Top 10 teams in Division 2. In the past three seasons, the Lions playoff record is 8-1, and just one of those games has been in the friendly confines of The Hawk.

The Maverick defense, while not particularly big, are adept at turning the opponent over, giving the ground and pound Maverick offense a short field. They’re a pressure defense that will take chances. Again, the Lions are familiar with this tactic.

The Lion offense has what Brian Pate calls their “ace in the hole”.  Miklo Smalls forces defenses to account for him on every play. Uncannily accurate through the air, Smalls has made huge plays with his feet. This is a dimension the Maverick defense hasn’t seen so far this year.

The Mavericks, are big, strong, and like to bully teams into submission. They’ve been good at it, as their 12-0 record would appear to suggest. The Lions, however, are just as big, and possess speed and athleticism that are among the best in the country. Their defense is playing at an extremely high level.

The goals for the Lions offensively remain the same: 1. Ball Security- The Mavericks thrive on turning teams over, and the Lions witnessed first hand last week what happens when a team is able to do just that. 2. Protect Smalls- Keep him upright and in a clean pocket, and let him work his magic. 3. Pound the Rock-That running game allows the Lions to control time of possession, and wear their opponents down, as evidenced in both playoff games so far. 4. Shoulder the Load-Prepare for a fired up Mankato team, in front of a packed and rowdy house. 5. Believe-In watching highlights prepared by the Lions Athletic Department, a common thread…”we’re not done yet”. Translated, this team is still hungry, still wanting to achieve goals that lie ahead in these playoffs. .

One play, one series, one quarter at a time, the Lions just keep grinding away.