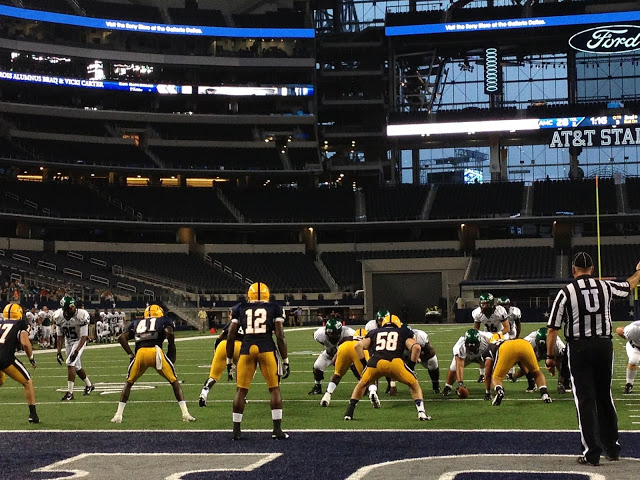 Greetings, Lion fans, and in this week’s edition of the Notebook, we’ll take a look at the Lions toughest opponent of the season, the fourth ranked Tarleton State Texans.

The Lions come into the game ranked 20th, and are fresh off of a 58-24 thrashing of rival Midwestern State. The Texans are undefeated at 6-0, and have not been seriously challenged. The closest they have come to a real threat to their season has been a 30-13 victory over Angelo State.  Let’s dive right in and see how this match up breaks down.

The Texans have a massive offensive line that has fueled one of the top offenses in all of Division 2, and are led by a pair of twin towers, red shirt senior Cody Hayes, 6’5″ 300 lbs., and senior J.P. Pearce, 6’4″ 310 lbs.. They’re an aggressive group, and like the rest of the Tarleton roster, like to play to the echo of the whistle.

The Blue Gang is led up front by sophomore Ronathon Elmore, 6’5″ 255 lbs., and a pair of senior defensive tackles, Chris Williams, 6’1″ 285 lbs., and Pierre Leonard, 5’10” 300 lbs. In addition, the Coach Xavier Adibi and his staff have used an effective rotation of players up front, including senior Peyton Searcy and Brandon Bascue, to keep the line rested.

Given their size disadvantage, the Lions will have to get into correct position, and tackle well.

The Lion back line is led by red shirt junior Alex Shillow, 5’10” 185 lbs., who leads the team in tackles with 31 (20 solo). Shillow has also been an outstanding special teams player as well, recovering two muffed pooch kicks.  Another red shirt junior, Dominque Ramsey, had two interceptions last week and several pass breakups. Red shirt senior Jaylon Edwards-Cooper, 5’11” 175 lbs., and senior Kader Kohou, 5’11” 190 lbs., round out a secondary that is going to need their best game of the year.

VERY SPECIAL, INDEED-Sophomore J.R. Fullen is the punter for the Texans, averaging 42.8 yards on 24 punts. Another sophomore, Christian Hernandez, is 6-8 on field goals, with a long of 31 yards.

WHAT’S GOING DOWN-THE VERDICT-Make no mistake, the Lions are in for their toughest game of the year. The Texans are a very good team, and add to that a nasty attitude that can be intimidating to some. They’re good, they like to let you know they are, and they do just about anything to make their opponent frustrated,  causing them to lose their cool.

The checklist for the Lions remains pretty much the same: 1. Keep Smalls upright, and give him time to work his magic. 2. Play Smart, and keep your cool-Avoid the trash talk and unnecessary personal foul penalties. 3. Accept Adversity-Stay focused. Don’t get discouraged by the negative play. Just come back hard on the next one. 4. Keep pounding the rock-Antonio Lealiiee has become a real run threat. Use that great offensive line to your advantage. 5. Believe-In yourself and each other.

On the surface, this looks like a very tough game for the Lions. The game, though, isn’t played on a computer monitor and keyboard, nor on paper. It’s played by young men.

Remember fans, last November, the Lions were inside the Tarleton 40, with 1:30 left in the game, and two timeouts, with a chance to tie. This is a very winnable game for the Lions.

These are the games that make a champion. They’re the ones that you just have to believe. To borrow a phrase from Kurt Russell’s portrayal of Coach Herb Brooks in the movie, Miracle:

And that the the Lions have. An opportunity. See You Saturday.