We have received word that a true East Texas State Football legend, Stumblin’ Sam McCord, has passed away. McCord was one of the greatest quarterbacks in Lion football history and was in a long line of fantastic Quarterbacks during “the Golden Fifties.”

All-American “Stumblin’ Sam” McCord was one of the early icons that had great success and help put Commerce Football on the Map.

McCord played quarterback for East Texas State University for three years after transferring from Paris Junior College where he had played for future Lions head coach Ernest Hawkins, a member of the LSC Hall of Honor. During the three years that McCord was the starting quarterback for ETSU, the Lions were 28-3-0 and won the Lone Star Conference Championship outright in 1957 and 1958 and tied for the title in 1959. ETSU’s conference record those three years was 18-3. The 1957 team, quarterbacked by McCord, won the Tangerine Bowl in Orlando, Fla., over Southern Mississippi 10-9 and was the only Texas team to win a post-season bowl game that year. In 1958, with McCord at quarterback, the Lions defeated Missouri Valley in the Tangerine Bowl, 26-7. McCord was named the game’s Most Valuable Player. As a quarterback, McCord led the Lone Star Conference in rushing in 1959 with 887 yards. He led the Lions in passing in both 1957 and 1959, led the team in both rushing and punting in 1958 and 1959, and led the team in total offense each of his three years at quarterback. He was a two time Little-Press First Team All-American and two time first team All-Lone Star Conference. 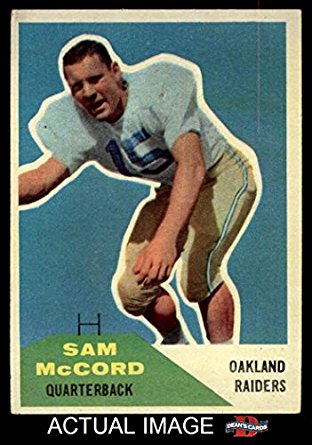 McCord was drafted by the Oakland Raiders after his college career was finished and became one of the first Lions to start a game in the National Football League. After his pro football career, McCord coached high school football in Texas before becoming an assistant coach to Hawkins at ETSU. McCord also served the University as Alumni Director and as Director of Security. He was the primary organizer of the Lions Athletic Hall of Fame which inducted its first class in 1978 and was himself inducted in 1981. He was also a color commentator on KETR radio, helping call Lion football games.

Please be in prayer for his family, his wife Barb who he was married to for 65 years, and entire McCord family.