Wade Wilson’s passing this past Friday was a shock to Lion Nation to say the least. We have had personal dedications to him over the past couple of days courtesy of Russell McLean, who had a personal relationship with him. However, I have been prompted by something I heard this morning to tell the world about what a tremendous player Wade was, and how his road to stardom and Football glory was not a smooth road and what all he had accomplished is truly something one could hang their hat on. I was listening this morning in traffic to the RJ Choppy show on 105.3 The Fan and one of the co-hosts talked about how he just realized this past weekend about how good of a QB Wilson was. He said “I always had this idea he had been a career back-up, turns out, he was one of the best in the league for a while.”

He was also one of the best in whatever league he was in. Whether it was Class AA, The Lone Star Conference, the NFC, or the NFL.

Wilson was originally born in Greenville, but moved to Commerce and grew up there. At a young age, he was already showing tremendous promise. At 8, he competed in the Punt, Pass, and Kick competition at the Cotton Bowl in Dallas and then did so again in 1971 at the newly opened Texas Stadium. The Son of a Coach, he knew he wanted to play Football and had the God-given tools to be successful at it.

His High School Career almost never got off the ground. In a 2016 interview with the Commerce Journal and Ryan Scott, he recalled;

Wilson’s love of football led him to join the team upon entering high school in Commerce, but an incident during his sophomore year almost ended his career before it began.

“I quit the football team,” Wilson said. “I was not seeing eye to eye with the way some of the coaches were doing their thing, so I made a huge decision. I cried my eyes out afterward.”

Wade Wilson played his High School Football on the gritty grass of Memorial Stadium in Commerce.

That changed quickly. Wilson rejoined the team and became the starting quarterback and punter, standing out at both. There is a story that legendary Dallas Cowboys quarterback Don Meredith was in attendance during Wilson’s Senior year when Commerce played Mount Vernon, Meredith’s hometown. Meredith saw the young gunslinger from Commerce and was impressed by his abilities and agreed that he had a future in the sport. He led Commerce High School to their best season up that point in their history. In 1976, he led CHS To A 10-1 season and a district championship capped off his time as a Commerce Tiger.

Wilson had caught the eye of one coach, Ernest Hawkins. Hawkins knew a good QB when he saw one, and could find the small town guys with big time potential. Wilson signed on to stay in Commerce and be a Lion of East Texas State. As a Freshman, he would be playing behind an All-American candidate in Terry Skinner, would be an NAIA All-American that year. He did serve as full time punter as a Freshman during the 1977 season. He also got to play a part in one of the biggest wins in school history, a 7-6 win over Texas A&I, riding a 46 game winning streak.

In 1978, Wilson took over as the starting QB and took his lumps. The Lions had a losing record for the first time in a decade, but it was not a total slump. He defeated Texas A&I and the Lions finished 5-6 overall. Wilson only tossed for 770 yards on 69 of 168 attempts.

1979 was a year in which Wilson got the Lions back into contention a 5-2 LSC record and a second place finish in the conference. He threw for 1,826 yards and and 10 touchdowns. Once again, Wilson and the Lions knocked off Texas A&I 3-0 in a year that the Hoggies would win the National Title. Wilson was named First Team All-Lone Star Conference and Honorable Mention NAIA All-American. 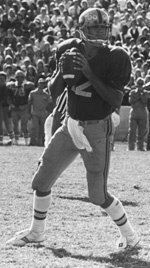 1980 was a year that the Lions made a run at the National Title. They returned to the NAIA National playoffs for the first time in 8 years. He threw for 1,978 yards and 19 touchdowns and got the Lions into the National Semifinals game. Heading into the game, Wilson had firmly established himself as the best QB in the NAIA in the entire country. Though the Lions fell short of winning another National Title, he guided them to an 8-3-1 record with some huge wins in that year. He was first team All-LSC and First Team NAIA All-American.

Drafted in the 8th round, Wilson was taken by the Minnesota Vikings. He was with them for 7 seasons before he became the starter full time and then in 1987, he outdueled the great Joe Montana and the San Francisco in the NFC Divisional round, and guided them to the NFC title game. He was an All-Pro in 1988 and led the entire NFL in completion percentage. He spent time with the Atlanta Falcons and the New Orleans Saints, where he was a starter for Jim Mora’s Saints during the 1993 season. He then landed back in North Texas when he became Troy Aikman’s backup for the Dallas Cowboys, winning a Super Bowl in that role in Super Bowl XXX. He then joined the Oakland Raiders, where he retired as a player in 1999, at the age of 40. 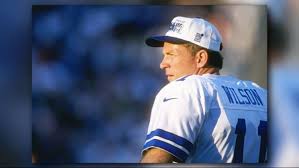 He rejoined the Cowboys as Quarterbacks Coach under Dave Campo from 2000-02, then went to Chicago in that same capacity with Chicago from 2004-2006, taking a raw Rex Grossman and turning him into a Super Bowl Caliber Quarterback. He returned to Dallas in 2007, serving as QB Coach until 2017.

College-3 Year starter, two time First Team All Conference, Conference MVP, 2 Time NAIA All-American, defeated Texas A&I 2 of his 3 years as a starter, and took the Lions of ET to the National Semifinals in 1980.

Pro-All Pro, Multi year starter for Multiple teams, Super Bowl Champion, and one of the best Quarterback Coaches in the League.

A Football life accomplished, and a life well lived.

Rest in Peace, # 12 of Old ET. We will see you again when that Roll is Called up Yonder.