Colby Carthel played his college football at Angelo State, being an all-Lone Star Conference performer and playing on some very good ASU teams. So, no surprise that his  5 matchups against the Rams have been interesting and virtually always have big time implications, and this one is no exception. So, let’s take a stroll down memory lane to recount our matchups against the Angelo State Rams.

Heading into the game, the Lions were in a prime position to get a shot at the Division II playoffs after defeating a ranked rival in Tarleton State, 22-20. The Lions were 6-2 heading into the game, with the only losses to West Texas A&M and Midwestern State. Angelo was having an average season. A win would firmly push the Lions into the national playoff discussion, a loss would likely doom any hopes of that. Playing in front of 7,200 fans, the largest crowd in Commerce in over a decade, The Lions struck first on a 54 yard pass from Harrison Stewart to Vernon Johnson. That was all the offense the team could muster in the half, as Angelo State controlled the clock and controlled the line. The fourth quarter started with Stewart hooking up with Johnson again on a 65 yard pass, and the Lions took the lead with just over 7 minutes to go on a Deric Davis pass to Vernon Johnson as the Lions led 20-19. The Rams worked their way down the field and scored with just over a minute and a half left. The Lions drove the field, converting on a 4th down Cameron Frosch fake punt. 2 plays later, Stewart’s pass was picked off and the Rams escaped with a 25-20 win.

In this slugfest of the two best teams in the Lone Star Conference, both teams came in with a lot to play for. The Lions struck first, but the Rams, led by All-American QB Kyle Washington, took a 16-7 lead at the end of the first. The Lions briefly reclaimed the lead to start the 2nd quarter, but the Rams tacked on two scores to go into the half with a 30-17 lead.

The second half saw the Lions roar back to cut the Ram’s advantage to a 33-31 lead, but that was quickly evaporated with a Kyle Washington run to make the score 40-33. Richard Cooper scored on the next Lions possession to go within 2, and the Lions tacked on a Saul Martinez 37 yard field goal to take a one point lead with just over 2 minutes left. ASU drove down to the Lion 30 yard line to attempt a 47 yarder for the game winner.  ASU kicker’s attempt was wide left and the Lion sideline erupted, but a flag was called for offsides, giving ASU a first down at the TAMUC 25. The Rams got down to the Lion 15. ASU attempted a field goal, but Colby Carthel called a timeout just as ASU’s kicker split the uprights. On the second try, the Lions got a finger on the ball that deflected it just enough with no time left and the Lions escaped with a 41-40 win.

In their second meeting during the 2014 season, a wet and bone chilling set of weather awaited both teams who would play for the Lone Star Conference’s at large bid for the NCAA playoffs. The loser would likely go the CHAMPS Heart of Texas Bowl. The Lions had already won the regular season title two weeks earlier, but that would mean nothing when it came to playing the in playoffs for the first time since 1995. The Rams ran out to a 21-6 halftime lead as the Lion offense sputtered and could get nothing going. The Rams tacked on another 7 to take a 28-6 lead at the end of the third, but the Lions rallied furiously to pull within 2 points off a Tyrik Rollison pass to Joe Bergeron. The Lions went for two to tie the game with under 30 seconds left, but Rollison pass to Seth Smith was incomplete out of bounds and the Rams escaped Commerce yet again. 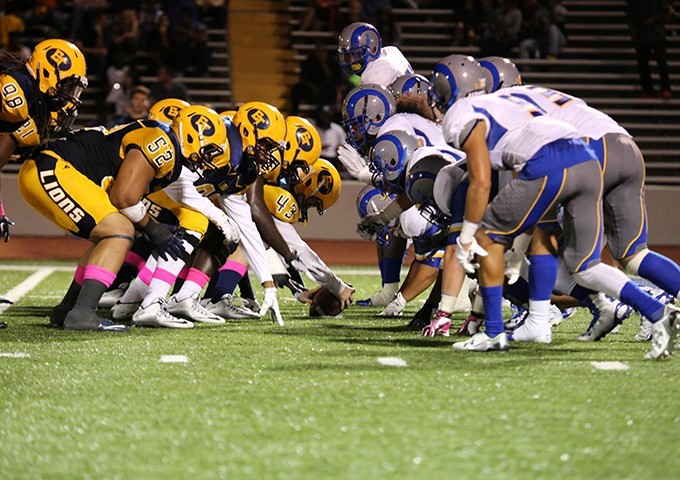 In front of a nationally televised audience, the Lions and Rams battled it out yet again for Lone Star supremacy. The Lions ran out to a 31-21 lead and held off a ASU fourth quarter rally to defeat the Rams for the first time in Commerce under the Carthel staff. Harrison Stewart was fantastic throwing the Football and Dionte Taylor made huge defensive plays to provide just enough of a cushion to give the Lions a huge win.

In a game that started in a horrific way for the Lions of TAMUC, the Rams of ASU led by as many as 18 points before the Lion offense went to work and battled their way back. Harrison Stewart had another magnificent game with 345 yards while Richard Cooper and Darby Smith were tremendous in the receiving corp. The biggest play was when Tyree Barton stuffed Kyle Washington at the Commerce 2 yard line on a fourth down play, and the Lions took over and ran out the clock to head to the LSC title game.

After falling behind 14-7 at the end of the first, the Lions completely took over the rest of the game and dominated the Rams for their biggest win over ASU in nearly 3 decades as Luis Perez had his day with the Ram defense, while the Lion defense scored on 4 takeaways to route Angelo State 62-14. It was Colby Carthel’s third straight win over his Alma Mater and pushed his record to 4-2 against the Rams.