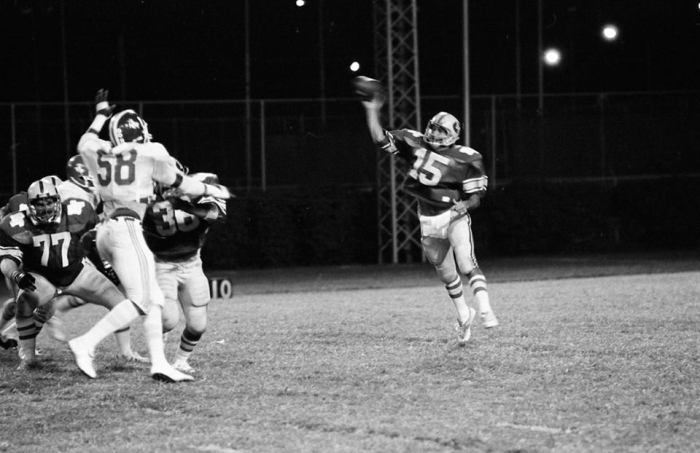 Kyle Mackey became the third out of 4 staring ET Quarterbacks to have a prolific career and start for an NFL Team.

The early 1980’s saw the Lions of East Texas State have a solid run of winning seasons. After the 1980 run, the Lions went 7-4 in 1981 and 6-4 in 1982. 1982 was a season that had given ET fans a preview of the season to come. ET and the rest of the LSC had joined the NCAA in the Fall of 1982, and had made a somewhat smooth transition. They also had a Quarterback in Kyle Mackey who had put in an All-American performance as a Junior and saw the Lions almost beat National Champion Southwest Texas State. Ricky Dirks had emerged as a go to guy for the running game while Garland product Wes Smith emerged at Split End as a deep threat to the passing game, and the Lion defense continued to be one of the best in the LSC and the entire country. 1983 had a lot of promise.

The season kicked off in Commerce with a 38-27 win over Cameron. Traveling to a ranked Southern Arkansas team, the Lions came away with a 24-15 win over the Muleriders. The next week the Lions traveled to across the Sabine River in Louisiana and took on Gulf South Power Southeastern Louisiana. Southeastern completely threw the Lions off of their offensive rhythm and handed the Lions a tough 31-23. The Lions returned to Commerce and issued a 51-14 beating of Sam Houston, followed up by shutting out Howard Payne 24-0 in Brownwood.

Halfway through the season and with a 4-1 record, the Lions had big game against Abilene Christian. An enormous performance by Dirks at tailback gave the Lions a 31-28 win over the Wildcats, setting them up against the number 1 team in the country, and the defending national champion, Southwest Texas State. What made it bigger was the face that SWT had been defeated by Stephen F. Austin the previous week. It was a big game.

One of the characteristics of the Bobcats of SWT in the early 1980’s was their tremendous offensive firepower, and that came out in full display as the Bobcats reasserted themselves at the expense of the Lions in a 44-21 win. Despite the setback, the season was far from over. 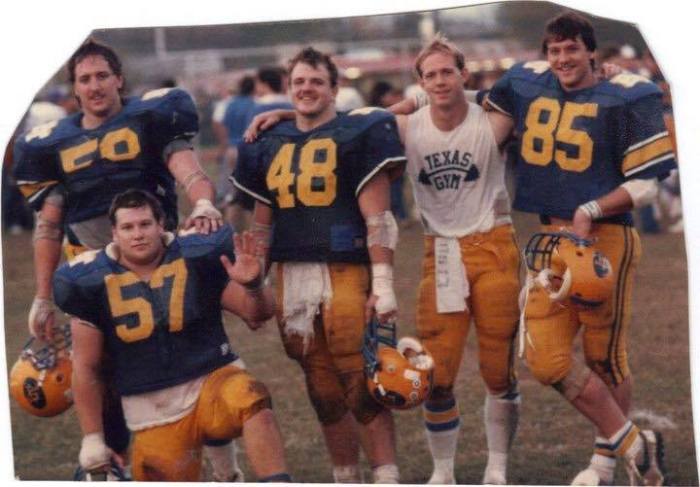 Brotherhood was a major element of the 1983 Lions.

Texas A&I came to visit Commerce and the Lions picked up yet another big win by beating the Hoggies 35-28. The home finale saw the Lumberjacks of SFA visit Commerce. In a defensive battle, the Lions did just enough, mainly led by the Kyle Mackey/Wes Smith connection on the passing attack to keep the Jacks defense off balance resulting in a 23-21 Lion win. The season finale would be in San Angelo vs. Angelo State. The situation was simple, if the Lions wanted a share of the title and a shot of the Division II playoffs they had to take down the Rams, and that is what they did. The Lion defense led the way and saw the Lions wrap up their season with a 27-3 win over ASU. The fate of a postseason berth would now be in the hands of the NCAA voters.

Like so many other times before, the polls favored the team that was not East Texas. The NCAA selected SWT to go the Division II playoffs for the third straight season. It was not a bad season by any means. It was however, the final Championship season for Ernest Hawkins. He would retire at the end of the 1985 season with 21 seasons as head coach, 15 winning seasons, 132 wins, 4 Conference titles, 1 Division Title, 3 postseason victories, and a National Title. He was then and now forever etched into Lion Football lore. 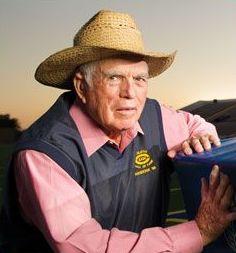 1983 Was the Final Conference Title for the great Career of Ernest Hawkins, who would retire 2 years later.