1985 was the end of an era, the Ernest Hawkins era. The man waiting in the wings was a 38 year old tough as nails defensive coach from Oklahoma named Eddie Vowell. Having been with the program for 5 years, Vowell knew the program well and had earned the respect of the team and the community.

Vowell’s first two years were rough. Going 2-9 in back to back seasons, it was the fewest win total since 1964, but in 1988 Vowell and the Lions broke through with an 8-3 record that saw the Lions reach as high as number 2 in the nation, before injuries and poor play saw them drop their last two games. The 1989 season saw a bit of a setback in the form of a 4-6 season, but the team that was coming back was both young and talented. Few in the media would say that ET would be doing any better than 6 or 7 wins. Once again, it was time for a surprise.

The name of the game would be offense during the 1990 season, and that is how it all started. Hosting West Alabama in Commerce, the Lions routed W. Bama 45-6, followed by another home route by smashing East Central 42-0. The first setback of the year was against a very good and ranked Southern Arkansas team in Magnolia. The Lions high powered offense was held in check at they lost to the Muleriders 22-17. ET traveled back to Louisiana to face Division I Northwestern Louisiana State. The Lions fought hard but the depth of the Division I school held the Lions off to hand them their second straight loss.

Then, the 1990 reign of terror began for the Lone Star Conference at the hands of the ET Lions.

Hosting Central Oklahoma in Commerce, a 17-10 win started the Lions off 1-0 in LSC play. The next week the Lions pushed their record to 4-2 as they soundly beat a good Texas A&I squad 26-6. Taking a road trip for their next tilt, ET traveled to Canyon to face off with the Buffs of West Texas A&M and put up a load of offense in a 51-35 shootout win. Hosting Eastern New Mexico the next week in Commerce, it was the day of defense as the Lions shut out Eastern New Mexico 19-0. 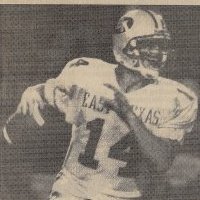 QB Bob Bounds made himself a legend in his 3 years as a stater. He was first team ALL LSC and Offensive Back of The Year.

With a 6-2 record and a 4-0 record in LSC play, the Lions kept their focus. They would probably need to win out in order to get crowned LSC champs and not have to share it with anyone. With three games to go, it was tough, but possible.

The 1990 Lions were full of both experienced talent and young talent, such as Sophomore Billy Minor who took this pass to the house in his first game back from a knee injury.

The 9-2 record for the season got the Lions their first outright conference title since 1972. It also set them up for prime position for a first, their first NCAA Division II playoff appearance. They had come so close in 1988, but this time there was no doubt it was where they belonged. Watching on a closed circuit TV in the old T-Lounge, The Lions saw their number called, and they would face off with Grand Valley State in Allendale, Michigan. It was the first time since joining the NCAA in 1982 that the Lions would be playing in the postseason after a decade’s long absence.

Playing in Allendale, Michigan on a bitterly cold day, the Lakers took the lead first on an Eric Lynch 1 yard run. The Lions responded on by marching 83 yards on 13 plays that ended with a Gary Perry 4 yard run to get the lead. Billy Watkins booted a 42 yard field goal with 6:42 left in the 2nd and the Lions went into the half up 10-6.

Kicker Billy Watkins seemed to always come through when he was needed to cement wins and leads for The Lions.

The second half was much like the first, with 5:42 left in the third, Bob Bounds connected with Gary Compton from 35 yards out to push the ET lead to 17-6. GVSU responded with a drive of their own in the early 4th quarter as QB Jack Hull took the ball in from 4 yards, then got the 2 point conversion by hitting tight end Sean Male to bring the score 17-14. Late in the fourth the Lions put together another drive and put it on kicker Billy Watkins to cement the lead, and he did from 35 yards out. Two late Laker drives were snuffed out by interceptions by All-American Cornerback Eric Turner and All-American DE Terry Bagsby. The final was 20-14 ETSU. 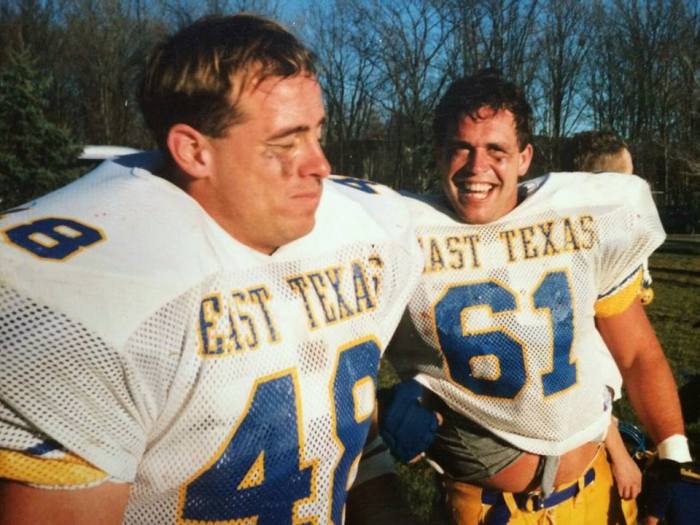 Don Madden and Chad Turner were all smiles after knocking off a # 2 ranked Grand Valley State Team.

The season ended the next week against a very good Pittsburg State game. The Lions took the road again to Kansas and the Gorillas asserted themselves very quickly running out to a 31-7 lead before the first half was even over. The Lions proved their guts quite quickly by making a furious run at the end of the second an beginning of the third by scoring 21 points to pull within 11 at 39-28, but turnovers doomed the Lions as PSU took the turnovers and turned them into points in the form of a 60-28 final score.

All-American Beast, The late and Great Terry Bagsby, one of the greatest Lion defenders ever.

The 1990 team was a special team in so many ways. So full of talent, and coached by a Lion Legend. Even though this was Vowell’s only Conference title, he would lead the Lions back to the playoffs the next year with many of the same players and again 1995. Aside from the 10 wins in 1990, he notched 8 win seasons in 88, 91, 92, and 95 and a 7 win season in 1996. He retired at the end of the 1998 season with 73 wins, the second most in school history. The Lions of the 90’s kept their national prominence due to Vowell and his method of doing things.

It was also the final time that a team with the name EAST TEXAS on their jersey would win an LSC title, as the school was renamed Texas A&M-Commerce in 1996.

When it came to playing defense and big plays, few could beat Eric Turner, an amazing athlete and Lion Great.