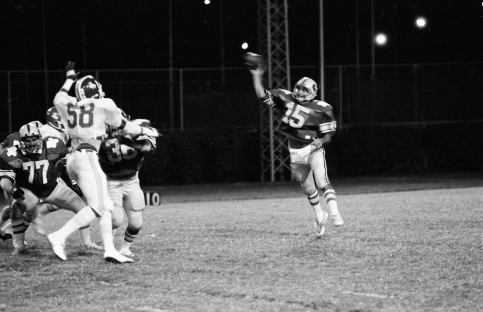 Bobby Wolfe (77) holds the line as Lion Quarterback Kyle Mackey gets a pass off.

There are many men who are happy to just be “everyday” guys. Bobby Wolfe is one of those guys. Do not let that tag however make you think that Bobby Wolfe is ordinary. He lettered with the Lions from 1980-1982, blocking for future NFL QB’s Wade Wilson and Kyle Mackey, and played on a 1980 team that made a run at a national championship. Wolfe is one of those guys who is truly a Lion that bleeds blue and gold, he lives in Commerce, has his degrees from Commerce, and there is rarely a man that was happier to don the Blue and Gold of Old ET.

Wolfe Leads the way blocking for a Lion Ball Carrier.

Favorite ET School Memory: “It took a while, but walking across the stage to get my degrees.”

Favorite Football Memory: “Playing as a semi-starter as a freshman ( I went every other series) in the National Semifinal game against Elon North Carolina. Even though we lost 14-6 that game was my most exciting then. The other would be the Spring game against our defense…we tore up our defense & excited to see films next day only to discover Coach Hawkins forgot to take the lens cap off the video projector.”

Overview: Like so many Lions, Bobby Wolfe saw some great things in Commerce. He had the chance to block for two future NFL Starting Quarterbacks, play for a National Championship despite falling short, and of course playing under Ernest Hawkins. Wolfe is a Lion through and through, and a proud one at that.