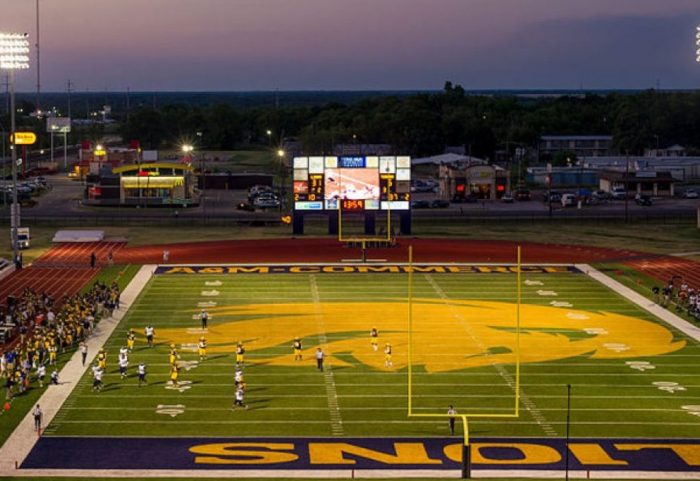 Greetings, Lion fans, and while everyone is eagerly anticipating the biggest basketball game in program history between the Lady Lions and Lubbock Christian, two top 10 programs in the country this Thursday, today we’ll take a look at the athletic facilities for the Lions, and what lies ahead.

With the recent announcement of the new, and from how it is described, state of the art video board at The Hawk, we here at The Wire wanted let our readers know what else is in store. This raises the some of the same questions: Why don’t we build a new stadium? Do we upgrade and update the current stadium? When are we going to fix the restrooms on the west side? All fair questions.

First of all, let’s take a look at this scenario: Build an entirely new stadium. What would it cost? Here are some recent examples, both around the Lone Star Conference, and some other facilities that we all are familiar with.

West Texas A&M-The Buffaloes finally returned to an on campus facility in Canyon after many years at Kimbrough Stadium in Amarillo. Buffalo Stadium made it’s debut this season at a price tag of $44 million dollars. Originally budgeted at $39 million, it is a top flight facility, easily accessible, and has great sight lines.

Eastern New Mexico-The Greyhounds completed their stadium in 2016 at a cost of $14.6 million dollars ($15.5 million in today’s dollars)

UT Permian Basin-The Falcons share Ratliff Stadium with Odessa ISD. It was completed in 1982 at a cost of $5.6 million ($14.8 million in today’s dollars)

Tarelton State-The Lions old rivals, The Texans unveiled their newly renovated stadium this season for a cost of $26 million.

Angelo State-LeGrand Stadium was upgraded to football only in 2014, but no cost figures are available.

Midwestern State currently shares Memorial Stadium with Wichita Falls ISD, which was rebuilt after the 1979 tornado. There are plans for a 7,000-8,000 seat, on campus stadium, with a projected cost of $18 million dollars.

Katy ISD Stadium in the Houston area, is very similar to McKinney, and is similar in price at $72 million dollars.

Allen ISD stadium opened their new stadium in 2012 at a cost of $ 60 million, but were then forced to spend $10 million in repairs.

Needless to say, there is a hefty price to be paid in order to build a new stadium.

There is much to be said for keeping the current location, and renovating the stadium. At heart, I’m a traditionalist. I’ve been to football stadium all over the state, from tiny communities where farmers watch their sons play six man football literally from their tailgates, to NFL stadiums in Tampa, Florida, Dallas, and Houston. I can honestly say that all things considered, there is no better experience than a bright Saturday fall afternoon in Commerce. From the walk across campus to the tailgate area (which stacks up with the best of them). It’s a short walk to a proud old facility with great sight lines, decent access, and for season ticket holders, your name on the back of your seat. That isn’t found in places like College Station or Austin, I can tell you.

Price wise, there isn’t a better deal out there. I hold two season tickets, and this past season, the cost was $180 dollars. Compared to College Station, that won’t even buy one bench seat, which comes at a cost of $525 dollars. Individual prices for a marquee game against the likes of the University of Alabama can run into the thousands. for a prime seat.

So, the question is? Where are we at? What’s next? As the saying goes, “the devil is in the details.” First, projects are undertaken in order to attract athletes, and provide for a better and safer experience. Two major things, we’ve seen already. A brand new artificial turf was installed this past summer. Much was made about losing what had become a trademark, the biggest on field logo in all of college football. Where did that money go that was saved? Into state of the art helmets for every player, providing another level of safety. The new locker room facility is very near completion, providing all the creature comforts, and again, providing that “Best In Class” experience. These are the visual things that the student athletes notice.

According to McMurray, there are a number of scenarios in what is known as the Intercollegiate Athletics Master Plan,  drafts of which are currently under review. The final draft is expected in early February, at which time will be reviewed by McMurray and President Rudin. According to McMurray, “our coaches input will be a critical component of this process.”

I asked McMurray, “If you had a wish list, concerning renovations, what would it be?”

He replied, “I would priortize two key items. One, moving the track to the west side of Highway 24. This benefits three programs. Men’s and Women’s Track and Field, and football. This would also provide added opportunities as a possible host for additional events and community engagement. Two, creating premium modernized spaces at Memorial Stadium (suites, club level, club seats) to modernize the fan experience. The rationale behind this is that creates dedicated revenue streams that can pay for these additions, and in time, be reinvested directly back into enhancing the student athlete experience. ”

This is just a small part of the overall picture. What also must be considered is more than just football. Since Tim McMurray arrived in Commerce in 2015, new dressing/locker room facilities have been added for Soccer, Softball, Men’s and Women’s Track and Field, Men’s and Women’s Golf, as well as upgrades in the Men’s and Women’s basketball in addition to the new floor. The Field House now looks more like a athletic facility instead of a converted barn. Team meeting rooms as well as branding/recruiting spaces have been added, volleyball and both basketball program offices have been improved, as well as a Student Athlete Nutrition Center (F.A.S.T.E.R.) addition and expansion have been completed.

Overall, there have been countless major projects undertaken and many more are on the horizon. The future is bright indeed in Commerce, America. Under the guidance of AD Tim McMurray, the sky is the limit.

There’s no better time to be a Lion.