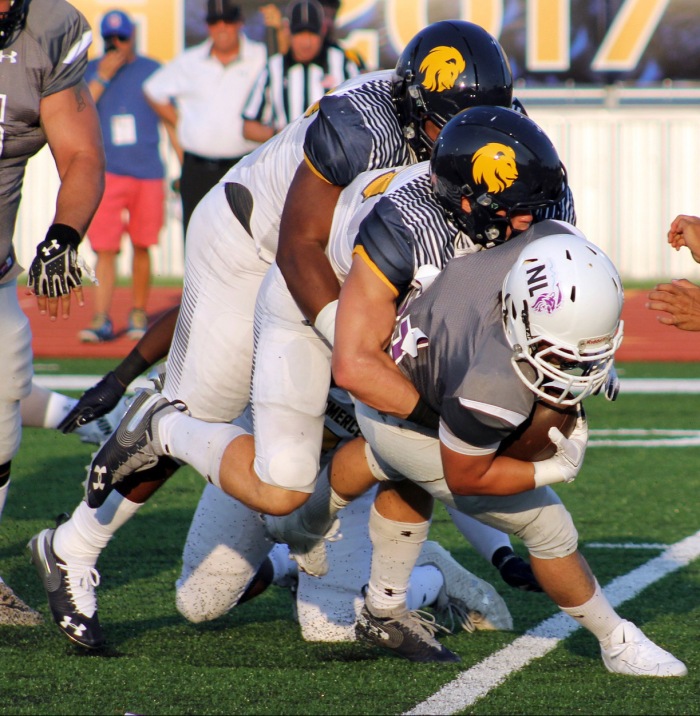 Greetings, Lion fans, and in this week’s edition of the Blue Gang Notebook, we’ll take a look at the triple option offense of the Greyhounds of Eastern New Mexico. First, though….

LOOKING BACK- The Blue Gang, despite some lapses in pass coverage, were at the top of their game last week. Given plenty of rest due to the ball control dominance of the Lion offense, they were able to effectively shut down the Western Oregon rushing attack, limiting them to 75 yards total, and a paltry 2.9 yards per attempt.

Outside of two big completions of 74 and 51 yards, the secondary did a masterful job of controlling the Wolves’s attack, as they would’ve totaled 130 yards.

Stop and think about that, Lion fans. Outside of two pass plays, the Blue Gang would’ve limited Western Oregon to 205 yards total offense, That is what my colleague Billy Minor would call “championship level” defense.

The lapses in pass coverage can assuredly be fixed by Coach Adibi and his staff. Let’s now take a look at the Greyhounds, and what the Lions will need to do to be successful.

The Lion defensive line has done a masterful job of stuffing the run without having to use a blitzing linebacker. Sophomore Ronathan Elmore has been a pleasant surprise, as well as senior Chris Williams. Veterans Peyton Searcy and Pierre Leonard round out a rotation that keeps defenders fresh.

They’re going to need every ounce of energy and determination this week. The Greyhound offensive line, like most in an option attack, is not particularly imposing , is very quick and aggressive. Paced by red shirt senior tackle Isaiah Callahan, and junior guard Villi Fishiahi, they have been able to shred their early opponents, averaging a whopping 453 yards per game rushing.

THE BACK LINE-Other than the aforementioned quirks in pass coverage, the Lion secondary and linebackers have done an outstanding job in both the passing game, and supporting the run defense.

The Lions are led in tackles jointly by a pair of red shirt seniors, defensive back Jaylon Edwards-Cooper, and linebacker Neema Behbahani, each with 5 tackles (4 solo).

The Greyhounds are led on offense by senior quarterback Wyatt Strand, the team’s second leading rusher, with 173 yards on 33 attempts. The Greyhounds throw the ball sparingly, with Strand completing 9 passes in 18 attempts for 158 yards and two touchdowns.

Eastern, while not a pass happy squad, are still a deep threat. Junior wide out Zachary Fields has only 6 catches for 130 yards, with an eyebrow raising average of 21.6 yards per catch.

VERY SPECIAL, INDEED-Lion superstar Dominque Ramsey was limited to 4 yards on 1 return, due to outstanding directional punting by Western Oregon. He and senior Kader Kohou had more success in the kick return area, averaging 26 yards per return.

Senior Tyler Vargas handles both kicking and punting chores for the Greyhounds, making good on 1 of 3 field goal attempts, with a long of 24. Punting has been a question, however, as Vargas averages 28.5 yards on 6 punts.

WHAT’S GOING DOWN- While the Greyhounds have posted some gaudy numbers on offense, they are dominated by a run first, triple option attack from the Flexbone formation. Like any other team of this type, the key for the Lions is to avoid the breakdowns in coverage, and play assignment football. They cannot afford to get caught up in the motion and misdirection that is part of what makes the option effective.

The goal for the Lions offensively is simple: strike first, strike often, and force the Greyhounds into something they’re really not suited for. Defensively, be mindful of the responsibilities, and as Dennis Hopper’s character, Shooter, said in the classic movie, Hoosiers, said…..”Don’t get caught watchin’ the paint dry.”

Recent games in this series have been a real dogfight. It looks like another.