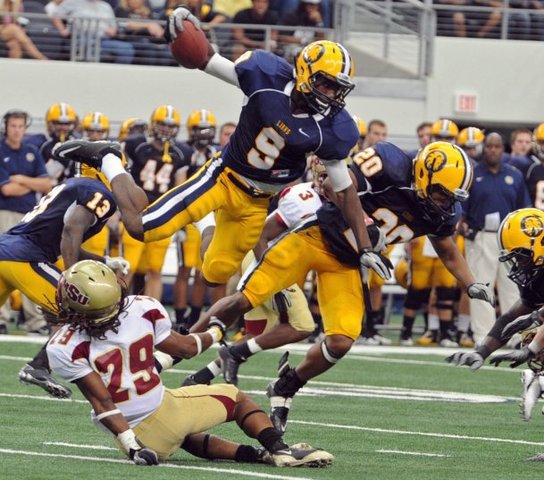 `1. They Were Ready For Us-It was apparent in the first quarter that MSU was ready for the Lions. They came right at us and did not blink. They ran right into the heart of the Lion defense and took advantage of the lack of preparation that the team was showing. Credit to MSU and their staff for being ready to play from the opening gun.

2. Coaching-Watching the post game remarks with Colby Carthel, he was not shy about the poor play and lack of execution, but remarked that the coaching staff had a large hand in it too. That shows how big of a man Colby Carthel is, rather than throwing players under the bus ,he pointed out that the staff had the team ill prepared and that laid at their feet. I will say that the offensive play calling was the best I have seen ever, they let Luis Perez sit back there and go to work and let him be in command of the unit, and not be micromanaged. Props to them for that.

3. The Defense was bad last night. I do not know of another way to say it. Again, maybe some of it goes to the players and coaches not making adjustments, but after the game I had a chat with a former ET defensive standout who noticed the same things that I did. The Mustangs were running essentially the 4 same plays, the read-pass option, draw play middle, outside stretch play, and vertical routes. The plays kept working because there no adjustments being made. No press coverage, the Lions were playing in a zone. The attitude of “we are afraid they might score” is a self defeating approach, of course they might score, that is why you play defense!

4. Luis Perez-I really have to tip my cap to the Lion QB. He just kept slugging away and played so hard and had a good game in my opinion. He made good reads and took what the defense gave him for the most part. As far as his two turnovers, one of those throws was made while he was running for his life and he just threw up a prayer and it fielded and returned like a punt. The other INT in the end zone was not something I mind, as he was just trying to make a play, then again, if your team is not behind 3 scores, you probably do not have to try to make that throw. I was very pleased to see Perez being allowed to just throw and score.

5. Unsportsmanlike-The unsportsmanlike conducts have to be stopped by any means possible. First, they make our team and school look bad and it is just poor behavior. They are incredibly selfish plays and actions, as you are saying you would rather take a 15 yard penalty and punish your team so long as you get to jaw at someone. That is just immature and childish. It has been a problem for 2 plus years with this team and needs to stop, it is just not acceptable and needs to fixed.

Going forward: You just have to put this one behind us and move on. We still are in playoff contention and if we win out should have no problem getting in. It might be a low seed again but this team can compete with anyone. It would be nice to see MSU lose so we can split a conference title, but I do not see that happening. They have Angelo State Next week in San Angelo and have Tarleton, and their toughest game is probably the season finale against Eastern New Mexico in Portales. Let’s hope one of those teams beats them so we can at least get a tie.

Overtime: This may sound like sour grapes, but I want to commend Charlie Chitwood and Brock Calloway for the professional approach they have in calling Lion Football Games. Both of them do their very best to be balanced and analytical and not bash opposing teams, schools, or be snide and/or underhanded in their comments in regards to opposing teams, and always heap praise on opponents when they do well against us. Some people associated with calling the MSU games need a lesson in that, and that is all I will say.