The Lions of TAMUC have lifted a conference championship trophy 3 consecutive years.

Overview: Since Colby Carthel arrived in 2013, the A&M-Commerce Lions have been resurrected as the once storied and potent program they were for the better part of 70 years. Recruiting top players from JUCO’s and focusing on building his program from successful Dallas/Fort Worth area high school and East Texas high schools, Carthel has brought a run of success that has not been matched since Milburn Smith’s teams in the early 1950’s. Carthel is missing just one thing that Lion Nation has yearned for, another National Championship. It would be their first since the great Ernest Hawkins led the Lions to the national promised land in 1972. This team has every tool in place to do just that.

Since arriving in 2013, the Carthel coached Lions have scored early, often, and at times in obscene amounts. The Lions have scored over 50 points in 13 games over the past 4 years and averaged 39.75 ppg last season to go with an offensive average of 447.3 yards of offense per game. They have had prolific offenses that relied on passing more than anything else. Gone is All-American tailback Richard Cooper, who was part workhorse part explosive playmaker. The Lions have a stable of backs who will be looking to take his spot, but it will probably be a backfield by committee for the Lions. At this point however, it looks like Ovie Urevbu is the leading candidate to be the feature back.

This offense starts, lives, and ends with signal caller Luis Perez. While not putting up staggering passing numbers, Perez leads the offense about as well as any QB in the country does. Last year’s 3,300 passing yards to go with 32 touchdown passes were good enough to place him as the LSC first team QB, the first Lion signal caller to do since Cole Cayce in 1996. He was also named All-American. The team will go as far as Perez does in his Senior season. The San Diego product will have some potent weapons to get the ball to. If he goes down, it would not necessarily spell total disaster as his back-up is Gabe Rodriguez, who is capable of leading if called upon. Rodriguez has 3 years in the offensive system and threw for over 4,000 yards and 48 touchdowns as a true freshman at McMurry. Add to that the young talent at Quarterback the Lions have and this is a position that they will look to build on.

The Lions lost big time weapons from the Wideout group that included Lance Evans, Darby Smith, Hayden Marsh, Chris Chumley, and John Thomas. However, D’Arthur Cowan is a man to look to as the top target as he returns for his final season. The emergence of Buck Wilson was on full display last season as he made splendid plays and had the best game of his career in the second round playoff loss to Grand Valley State. Shawn Hooks is every bit as dangerous in the open field as he is returning punts, and Justice Luce is a sure handed, big bodied receiver with a ton a of potential. TE/A Back Vincent Hobbs will be an X factor as he moves to a critical part of the offense that is responsible for blocking and receiving.

The Offensive line will be anchored by All-American Jared Macharro and returning starters John Aguilar and Poet Thomas. The good news is that more than half of the starting line from last year is coming back, and the line is the most important part of an offense that features and relies on a pocket passer like Perez to do his job. Who will step up to the plate to fill the other positions is still in the air, but look for it to be a battle among 3-4 other aspiring starters. 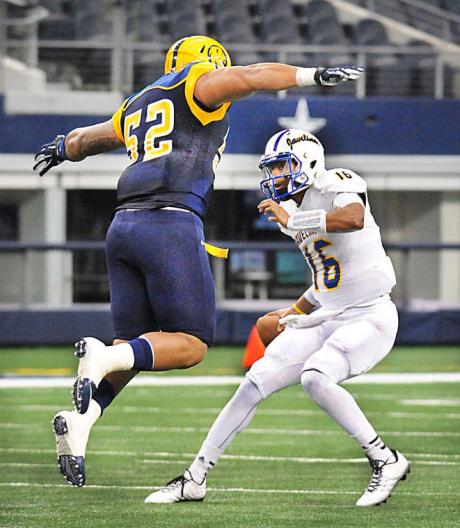 The defensive line and linebacker corps return a plethora of starters that had opponents average only 21 ppg against them. Last season the pass rush and effective running defense saw a unit that held 6 opponents to under 20 points and pitched two shutouts. Returning starters are Peyton Searcy, Kieston Carter, DD Fletcher, and Garrett BluSbaugh. Add to that the emergence of Brucks Saathoff and the fact he is likely a starter this year and you have one mean and lean front seven. The challenges for this group will be how they do against teams that feature power runners such as A&M-Kingsville, and to a lesser extent Eastern New Mexico. Making stops against fast teams is not a problem, but the challenges lie with bigger teams that run the ball effectively.

The Secondary will be a bit of a toss up as to what kind of a unit they will be. Yusef Sterling-Lowe will be the main man on the secondary. His cornerbacking skills and big play abilities are one key component. How much of a shut down corner he can be will depend on how much he has grown from last year. Along with another All-Conference selection in safety Trey Porter, the secondary could (and should) be at the very least an exciting group to watch and cause the turnovers that have brought Carthel & Co. so much success.

Lion Special Teams have been one of the best in the nation since Carthel arrived. Every facet of the special teams have been a major factor in the success the past 4 seasons. This year, it has the potential to be the best yet. Placekicking duties fall to Junior Kristov Martinez who has been golden kicking field goals, extra points, and also kickoffs since he was a true freshman. When it comes to returning punts, nobody in the league is better than All-American Shawn Hooks, or even in the entire country. Buck Wilson returns to the kickoff return unit joining Hooks on kickoff returns making for a potent tandem.

The punting situation looks to be one to keep your eye on as True Freshman Tristan Perry from Mineral Wells could easily snag the job. One interesting thing to note is that Perry was a standout high school punter as well as a quarterback and was All-DFW. Having a kid who averages a 45 yard punt but who can throw the ball very well is a trump card for the Lions to have in their bag of tricks.