In more ways than one. 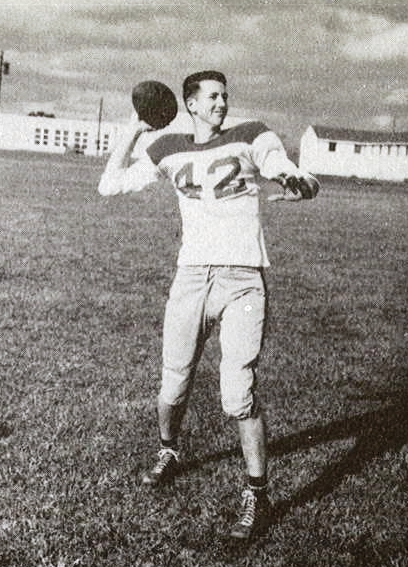 James Grey came to Commerce and was used to become a prolific passer for a new offensive strategy.

In the 10 decades that Texas A&M-Commerce has been playing Football, there has only been one decade that stands out head and shoulders above the rest, the Golden Fifties.

The decade actually started out with a subpar season in 1950 with Bob Berry’s final season. A losing record and a fourth place finish in conference is not what place high expectations for the following season, especially when the the school hires a 39 year old head coach with virtually no college Football experience who had led some great school boy basketball teams and had success as a Football coach at Mt. Vernon High School. ET found itself hiring a young and promising head coach, and nobody saw what would come next.

The first change was where the Lions were playing. A 12,000 seat stadium named in honor of the fallen ET students during World War II with a brand new track and facility that was way ahead of it’s time. The fanbase was still expecting good results and that would not change.

Smith’s season started with a tough loss to Abilene Christian in Commerce to start the season, but the next week the Lions notched a win in Ruston, Louisiana by taking down Louisiana Tech 27-7. For the final time in school history, the Lions would face off with North Texas in Denton, and like the most recent interactions with the Eagles, the Lions were routed 48-7. UNT would move into the major college football ranks over the following years and had been preparing for it in the previous years. Smith’s 1-2 start made many wonder in the community if the Lions were just going to stay in downward spiral.

The rest of the season would be the polar opposite of the beginning of the season. Quarterback Jim Grey would be the first truly prolific passer in Lion football history. Though the Lions primarily lined up the T-Formation, Smith became known for using spacing running offensive plays that allowed players to line up tight but attack different areas of the field, and therefore the Lions offense became incredibly potent and created an offensive attack that could pass as well as it could run. Unheard and and unseen during those times, the rest of the season saw the Lions dominate.

Heading back to the friendly confine of Memorial Stadium, the Lions blew out Lamar 48-7 and the next week did the same to Midwestern State 46-26. The next week the Lions traveled to Deep East Texas and blew out Sam Houston State 53-21, then headed southwest to beat Howard Payne 38-21. The next game was huge as Stephen F. Austin State came to Commerce unbeaten and riding high. The Lions did just enough to send the previously unbeaten ‘Jacks home with a 21-19 loss.

The Lions would close out the final 3 games of the season on the road as they took on Southwest Texas and defeated the Bobcats again in San Marcos 28-21. The next week ET played in Sherman and defeated a tough Austin College team 12-7, and finished the season in Alpine in Big Bend Country by defeating Sul Ross State 47-21.

It was overall the best season in years for the Lions. It was the most wins in school history at the time, as no Lion team had ever won more than 8 games, and it was their 8th conference title in the 20 years they had been competing in the Lone Star Conference. It was another season in which the Lions went undefeated in LSC play.

Cobble, McCormack, and Brown were joined on the Conference First team by Tackle Jack Hetherington, while QB Grey and Charles Hadleman, Guard Ernest Stinson, and Fullback Bob Williams were named to the LSC Second Team.

The good times were just beginning in Commerce, America.