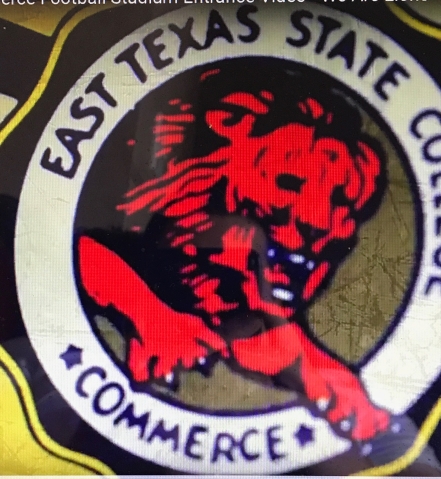 As we get back to the Championship Chronicles, this is a team that gave the conference and the country a taste of what they were about to get for almost a decade. The “Golden Fifties” were upon us, but before that amazing period in Lions Football happened, the Lions and Coach Bob Berry, who had returned to Commerce, had one more title to win.

When the war ended, Bob Berry came back to Commerce and retained Dennis Vinzant as his right hand man. The Lions had not won a conference title in almost 7 years, but Berry had a strong team from the previous years. Also, the Lions had played a school from Canyon, Texas for the first time called West Texas State College, and the Lone Star Conference only had 4 Football teams competing. The season was shaping up to be interesting if nothing else.

The season opener saw the Lions travel to Canyon for the first time in school history and get beaten badly by the Buffs of West Texas State, avenging a loss the Lions had handed them at the Cotton Bowl the previous year. The next game was against Howard Payne in Brownwood, and the Lions disposed of Jackets to notch their first win 26-14. The Lions opened conference play at home by downing the Lumberjacks of SFA 13-0, yet another shutout pitched by a Berry coached defense. Next, the Lions faced Corpus Christi State (now Texas A&M-Corpus Christi), a team that only been opened for 2 years and only fielded a football team for one year, and the Islanders came to the Blacklands and shocked the Lions.

Berry, frustrated to the core, started to have two a day practices for 3 hours at a time. In the morning it was about being tougher, in the evenings it was about execution of the gameplan. The loss was embarrassing to the program and the community and their was serious doubt that another conference title would be won.

The Lions hosted the Midwestern State Indians (former name before the PC police made MSU become the Mustangs) and dominated MSU at home 25-13. Berry did not ease up and it showed. The next two games would be critical as they were the only conference games left. ET travelled to Huntsville for a date with Sam Houston State. Berry had one plan, grind out a victory and that is what came to pass in a 20-13 win. Once again, the Lions had to slug it out in San Marcos for a conference title, and once again, a battle hardened Lions team downed the Bobcats 13-6 and brought another conference title to Commerce. It was Berry’s 4th and final title, however the season was not done yet.

The toughness of the Dandy Lions continued to show as they hosted a Trinity team that everyone expected them to lose to. Trinity was in the middle of a 9 win season, but a brutal slugfest in Commerce saw the Tigers only get a tie against the Lions, however the Lions were routed in the season finale in Commerce by a strong and now increasingly potent North Texas State team 59-6. It would be one the final matchups between the Eagles and Lions. Despite the loss, the Lions still walked away with a conference title and a 5-3-1 record overall. This was just the beginning of what would come to be a very fruitful time in Commerce, America.

Running Back Bill Engle and Offensive Tackle Fred Herring were tabbed as All-Americans and were joined on the LSC First Team by Defensive End Joe Murphy and Offensive Lineman Dick Norris.