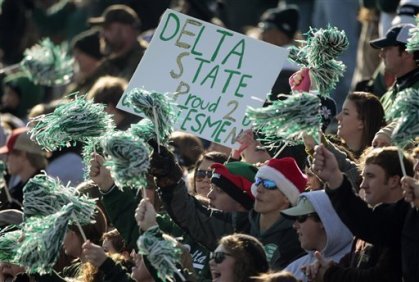 BTB will be doing a weekly interview with a fan of an opposing program to give a great preview of the game.

I was going to say I have a surprise for all of you, but I will just go with this. Every game week as part of the write up I will have an opponent’s fan that I have contact on the D2football.com message board that is willing to sit down with me and discuss the matter at hand. I had the pleasure to speak with “Shugley”, a Delta State Fan and Alum to discuss the game in 10 questions (plus a bonus feature). So here he is.

BTB: Thanks for being here.

BTB: What makes this DSU team different than last years?

Shugley: A lot more speed, We returned plenty of guys, so there is good experience on both sides of the ball.

BTB: Give us your impressions in your game against KWU and what strengths and weaknesses do you see?

BTB: Comparing last years game to this years game, what comparisons can you make?

Shugley: Seemed like TAMUC slowed down a little bit while DSU is seeing if they can push the throttle through the floor.

BTB: If you were a TAMUC fan, what would you be scared of knowing what you know about DSU’s team?

Shugley: Casey Osbourne is back, as well as our entire offensive backfield and we added an even better running back.

BTB: Flip side, do you see or know anything about TAMUC that scares or worries you?

BTB: What are your thoughts on this little budding rivalry, and do most DSU Fans consider it a rivalry?

Shugley: I hadn’t thought about it until someone said it. But honestly, when the schedule came out the two games I was most excited about was this and UWG.

BTB: Were you at the 2013 matchup in Dallas or last year in Commerce? If so, what did you think?

Shugley: I did not, but did listen to them on the radio.

BTB: For those who are going to Cleveland for the matchup, what places are there to go to eat at or some things to entertain a visitor?

Shugley: Obviously, the brand new Grammy Muesem. It is only one outside of the one in LA. Cleveland has great food. For burgers, Hey Joe’s. Belezar’s in Boyle has one of the best steaks you’ll ever eat. For catfish, catfish cabin or Fat Baby’s. And pizza, Lost Pizza Company.

BTB: Bonus Question: What the heck is up the name “The Fighting Okra”?

Shugley: It’s kind of our schtick. I take great pride in “The Fightin’ Okra” but I would never scream at a sporting event “Go Okra.” I am by no means an expert, but I do love DSU.

Thanks to Shugley for a nice Q&A!