Lion Wire contributor Billy Minor has a ton of great stories when it comes to his playing days. The two time All-LSC Receiver and 1990 conference champion told us the story of playing in one of the best small college towns in America, Pittsburg, Kansas. B.Minor recounts; ” I saw for me what was the first true college town in Pittsburg, Kansas. Red and gold was everywhere we saw on the path to the stadium. Their fans were jam packed in it and as rowdy as I had ever seen. They had a 30 foot menacing looking blowup gorilla in the end zone and “Welcome to the Jungle” blaring so loud on their sound system we couldn’t hear the guy next to us during stretching.”

ET Grad and Commerce resident Harry Icenhower and his wife Reba contributed greatly to get King Pride off the ground.

As it turns out, Billy was not the only person who noticed the King Kong looking Gorilla that the Pitt State fans. Reba and Harry Icenhower, two boosters who supported the Lions in every way, shape, and form were not fans of the behavior of the Pitt State fans, but loved their enthusiasm and the way the fans created a true home field environment for the Gorillas. After the Lions lost to the Gorillas in the 1990 NCAA Division II Quarterfinals, they knew they had a Week 2 date with them in the 1991 season. It would be the debut of the brainchild of the Icenhower family, a large, inflatable roaring Lion on its haunches with it’s mouth agape and a menacing look. He would just happen to make his debut on September 14, 1991. After the Lions had hammered Livingston 44-6 to start the season on the road, ET returned back to Memorial Stadium and in a blue crate attached to a trailer read “KING PRIDE.” Soon, on the northeast corner of the stadium stood a 30 foot Lion that might as well have said “Welcome to OUR JUNGLE.” 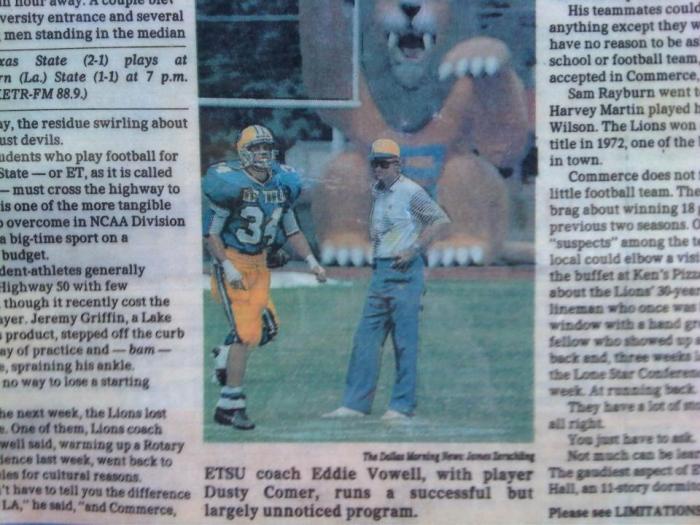 King Pride made the front page of The Dallas Morning News SportsDay in September 1992.

“30 feet tall and looking ferocious” is how Billy describes it. To top it off, the 6th ranked Lions knocked off the 2nd ranked Gorillas in front of 8,600 fans by a score of 20-13 to avenge their playoff loss in the previous year.

King Pride became a staple of campus pride. He even started making appearances in the annual “Fill the Fieldhouse” game inside of the Fieldhouse as the Basketball players would run under King Pride and onto the floor. He also made appearances at the preseason pep rallies and also even the Bois d’Arc Bash in Downtown Commerce. He has been a part of the Lion tradition for nearly 3 decades. However, the big fellow has been missed in the past couple of years for some reason. A lot of fans would love to see him back and his intimidating pose glaring at the opposing fans and teams, and with the addition of the new videoboard, putting him in the Northwest corner might be just enough to enclose the stadium on that end.

He may have been in hibernation, but its time to bring the Big Cat back. He is part of the tradition of not just Lion Football, but Lion athletics as a whole. We hope to see him back soon.