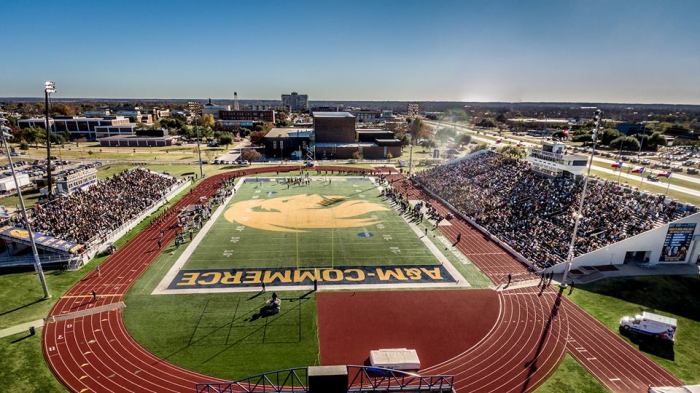 Greetings, Lion fans, and it’s that time of year again…..The only thing that gets a football fan in Texas more excited than Opening Weekend in the fall, high school and college playoffs…..National Signing Day.

To say David Baliff and his staff hit the ground running is an understatement. The Lions had 52 signees, and what follows is a closer look at the standouts(Note: for a complete summary on all the new recruits, email me at rmclean@sbcglobal.net and include Lion Signing Day in the subject line, and I’ll be happy to send you the complete list.).

There are 9 recruits that have really caught our attention here, and they are the ones we’ll discuss here today. It is by no means a knock on the other recruits. They’re all outstanding prospects, most just need time to develop and adjust to a new level of competition. With that said, let’s get to it.

DeRondre Moore, WR, Rosenberg Terry-6’1″ 165 lbs. – In a word, this young man is FAST. He has very soft hands, is a great route runner, and goes up and attacks the ball(somewhere, Ernest Hawkins is smiling). Moore is a very aggressive blocker, and is comfortable either in the slot or wideout positions. He is also a very dangerous kick returner in the mode of Reggie Kincade.  In our opinion here at The Wire, Moore could be in the middle of the action come this fall.

Miklo Smalls, QB, Plano East-6’2″, 185 lbs.-Smalls comes to Commerce after spending a year as a part-time starter for Baliff at Rice, then transferring to Last Chance U. He has a very strong-arm, and can make all the throws needed. Stands tall and poised in the pocket much in the mode of a Luis Perez or Wade Wilson. He throws a very catachable ball, and is extremely accurate. He has good speed and is very good on the zone read. In the event of a Kane Wilson injury, Lion fans should feel very comfortable with Smalls at the helm of the Lion offense.

Marcus McClanahan, QB/WR, Dallas White, 5’7″, 165 lbs.-Has good speed and quickness, is an elusive runner. He has also played at defensive back, and shows good technique and tackling skills.  The kind of player you would love to have as a coach.

Eric Hebert, WR, Manvel, 5’4″, 145 lbs.-Don’t let the size fool you. Hebert would be the kind of small, fast receiver that Mike Leach would have loved when the Pirate was swinging his sword on the South Plains. A natural fit as a slot receiver, Hebert is also an outstanding returner of punts and kickoffs. David Baliff  found a real gem here.

Spencer Long, RB, Barbers Hill, 5’11”, 200 lbs.-A tough runner with very good speed, Long reminds me of the former Lion great, Van Hargis. Great strength, and a very good runner between the tackles. He has good hands, and despite his size, could be a good fit as a tight end.

Jackson Allen, TE, Marion HS, 6’4″, 220 lbs.-Very similar to one of the best tight ends ever to wear the blue and gold, Vincent Hobbs. Allen has a big frame with room to grow. Very sure handed, Allen is very good runner after the catch, and is a solid and aggressive blocker.

James Clark III, OL, Dallas Bishop Dunne, 6’4″, 255 lbs.-Great strength and footwork, particularly in pass protection. Clark is a dominant run blocker, is very aggressive, and has a bit of a nasty streak.

Xzavion Florence, S, Dallas Kimball, 5’10” 180 lbs.-Very good speed combined with a quick first step. Florence is an aggressive blitzer off the corner, and likes to get after the passer. Has the ability to move to linebacker if necessary. Plays with a fast motor.

Kobe Savage, DB/QB, Paris, 6’0″, 175 lbs. -The subject of a feature by former Lion great Billy Minor, Savage is a big hitter from the DB position. He has great speed, and throws a ball that is easy to catch. Savage is one of those players that a coach finds a way to get him on the field.  Has the potential to be a very good kick returner, or as a threat at QB in a Wildcat formation or short yardage package.

Overall, this class of Lion recruits can be described as Coach Paul Bryant described his defensive players-Agile, Mobile, and Hostile. Size, speed, strength, and aggressiveness. The Lions have indeed reloaded.

Now…..when is that spring game?