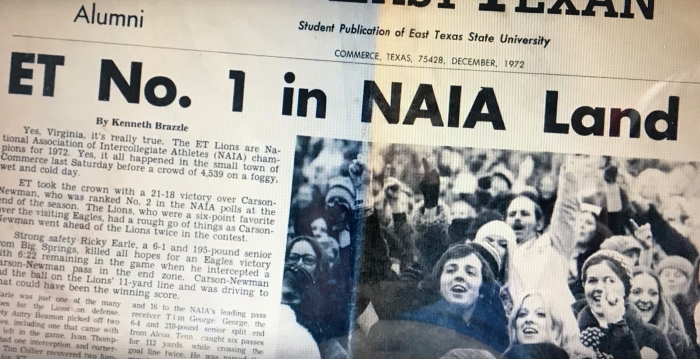 Well Lion fans, here we are….where we have longed for, and deserve to be, after a 45 year wait, the Lions are home again, in the National Championship Game. The journey that began on a sweltering night in North Alabama all comes down to this. 60 minutes to determine a champion. We’ll take an overall look and give you, the reader, an opinion on who has the edge in the matchups between the respective offenses and defenses, special teams(which were mistakenly left out of Part 2), coaching, intangibles, and finally, The Verdict. Let’s have at it.

Argonaut Offense vs. Lion Defense-The Lions now return to an opponent with a familiar look, as the team from Pensacola, Florida runs out of the Spread formation. The Argonauts are led in passing by Mike Beaudry, in rushing by Chris Schwarz, and receiving by Antoine Griffin and Ka’ron Ashley. They are fairly balanced, and thrive on taking advantage of a short field after their defense forces a turnover. This propelled them to a 17-0 halftime lead and eventual win over Indiana University(Pa.). The receiving corps is big, quick, and are capable of the big play.

The Lion defense has proven more than adept at balancing the attacking, aggressive style that has served them well this season. The one tendency that has gone against them is giving up a score on the opening drive of the game. Fortunately, defensive coordinator Justin Deason and his assistants have shown a masterful ability to adjust and control the opposing offenses, if not outright shutting them down. Minnesota State Mankato managed just 35 total yards in second half of the regional final matchup. In the regional semifinals against Central Washington, the Lions trailed 28-7 at the half before a masterful performance by the defense allowed the Lions to rally and win the game in 2 overtimes. Operating out of a 3-4 or multiple sets, the Lions are led in tackles by Brucks Saathoff, a Cliff Harris Defensive Player of the Year nominee, Garrett Blubaugh, NCAA Elite 90 award winner, and Alex Shillow, an underrated defensive back.

The key to this matchup will be the Lions ability to cover the bigger Argonaut receivers, while controlling the running of Schwarz. The Lions have shown an uncanny ability to adapt to whatever the opponent has thrown them. They’ll need to be at their best Saturday. EDGE-LIONS.

Lion Offense vs. Argonaut Defense-For the Lions, as has been mentioned before, the song remains the same…..protect Perez, establish an effective running attack to balance the offense, and don’t turn the ball over. Luis Perez-we know the numbers and the accolades-if he has time, he has the ability to pick apart a defense. If the Argonauts choose to play press coverage and blitz the Lions, Perez and Company could have a field day. On the other hand, if they choose to drop defenders into coverage to neutralize the passing attack, Hale and Thompson should be able to find running lanes and be effective. Hale had a big touchdown run to put the Lions ahead to stay last week, and Thompson provides a very nice change of pace with his power running to complement Hale’s shiftiness and speed.

They face a West Florida defense that ranks 9th in the nation in sacks, led by John Williamson with 13. They like to pressure opposing offenses into turnovers and make the best of a short field. They have force a total of 24 turnovers with 18 interceptions. They parlayed this ability into 17 points in last week’s semifinal.

As has been said before, if the Lions just play their game, win the three key goals, then it should be a very good night. EDGE-LIONS.

Coaching-West Florida, in their second year of football, have done an amazing job under coach Pete Schinnick. He has guided this team to an 11-3 record, defeating top ranked Indiana University(Pa.) along the way.

There are not enough superlatives for the job that Colby Carthel and his staff have done this year. They have overcome injuries, a narrow midseason loss to Midwestern State in which their hopes for a fourth straight Lone Star Conference title were dashed, to rally and arrive at the title game having defeated teams with a combined 45-4 record, with three straight road wins. They have been able to meet and adapt to run heavy offenses, the triple option attack of Harding and Eastern New Mexico, the RPO of Central Washington, and the massive size of Minnesota State. Not only meet and adapt, but win. EDGE-LIONS.

Special Teams-The Lions are led by the best pressure kicker in the country, at any level, in Kristov Martinez. He has won games with his leg against North Alabama, again at Central Washington, and numerous other game changers, including a 48 yarder against the wind at Minnesota State. Tristan Perry has averaged 39.3 per punt, and shown a flair for the dramatic, successfully executing a fake punt from his own 10 yard line in a daring call by Coach Carthel.  Buck Wilson and Reggie Kincade lead the team in kickoff returns, and Wilson has a 100 yard return for a TD. Shawn Hooks returned last week to anchor the punt return game, with a long of 37 yards. Buck Wilson surprised everyone against Minnesota State with an 80 yard punt return for a touchdown.

With  2 returns for touchdowns, and several other big returns, plus the best kicker in the country, the Lions definitely hold an advantage here. EDGE-LIONS.

THE VERDICT-Make no mistake. This West Florida team is talented, and have achieved a great deal for a second year program. This will be a hard fought game, but……you can celebrate, Lions fans. The 45 year drought is over. Final-Lions 38, Argonauts 24.

The Final Word-I hope everyone has enjoyed reading as much as I have enjoyed writing it. I’ve tried to give you, the reader, as much of an overview as I am able. As we all know, the games are not played on paper. They are played by humans, and anything can happen. What I have tried to provide you was how, according to the numbers, and what I have been able to see of both team past performance, how I envision the game turning out.