In Commerce, Texas, Colby Carthel had brought Championship Football back to Commerce. His first season established a winning culture. The second season overlapped winning and championship cultures. The third season was all about winning and going to the next level, competing for the playoffs. The fourth season would be about competing IN the playoffs, and for a national title. Like the previous seasons, the Lions had to replace quite a bit of talent, but the ability of the Lion Coaching Staff to recruit solid area high school players and JUCO transfers gave the team the ability to not rebuild, but to just reload.

The schedule initially had the Lions hosting perennial power North Alabama in week one, but UNA had the chance to take on long time rival and current FCS team Jacksonville State. The reason? Auburn University. Yes, that Auburn. War Eagle, Cam Newton, Tommy Tuberville, all of that. Here is the story.

In the Fall of 2015, Jacksonville State travelled to Jordan-Hare Stadium in Auburn and almost beat the Tigers in a 27-20 game. Auburn had decided to drop them for the next year to open the season, so Jacksonville State had no season opener. They reached out to North Alabama and convinced them to drop their game against TAMUC and play them instead. Jacksonville State bought out the game and the Lions got a nice payday for their schedule being hindered, but it left them without a season opening opponent. The Lions did find a strange opponent in the University of Faith-Florida Glory Eagles.

U-Faith reached out to Commerce and agreed to come and play. The Glory Eagles were not affiliated with the NCAA or the NAIA. Rather, they play in a semi-defunct NACAA league, one of only 5 teams in the entire conference. The game would count as a win for the record, and for absolutely nothing else. With the Lions having to face off against Delta State on the road, the team needed something to warm up. They accepted.

The 2016 Lions were out to prove their guts.

In a game that felt more like a scrimmage, the Lions played only a little over 3 quarters and routed the Glory Eagles 62-0. Everyone on the dress roster got to play, and the Lions pulled their starters after the first quarter.

The next week was much different as the Lions traveled to Delta State in Mississippi. It was the first big test for new starting Quarterback Luis Perez and a new defense. The game was intense in the first half. The Lion offense played well but the defense struggled in the first half. The script totally changed in the second half as the Lions outscored The Statesmen 16-8 and the Lion defense shut down DSU’s offense until the very end of the game and the Lions left the Delta Country with a hard fought 40-28 win. 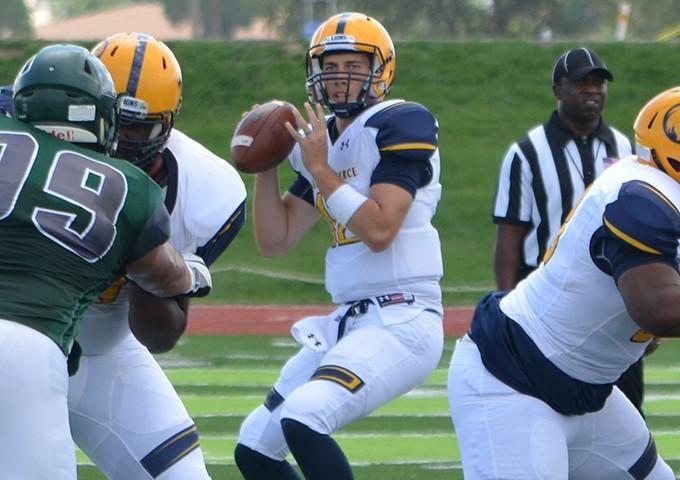 Luis Perez showed the conference and the nation he was one of the best signal callers around during the 2016 season.

LSC play started the next week as the Lions traveled west to Portales, NM for a date with Eastern New Mexico in a brand new on campus Greyhound Stadium. Luis Perez had his coming out party as he completed 24 of 31 passes for 342 yards and 5 touchdown passes, and the Lions shut down the usually potent Greyhound Offense in a 49-10 route. It got  the attention of the pollsters as the Lions went to number 6 in the country, their best ranking since 1991. The next week the Lions faced another tough challenge, old rival Texas A&M-Kingsville at Home.

The Javelinas came to Commerce with a huge chip on their shoulder having lost the previous 4 games against The Lions. 3 of them had been blowouts but with a coaching change in Kingsville, it was apparent from the Hoggies opening drive they meant business. The Lion offense kept up the performance just enough to go into the half 17-16. Kingsville took a 30-24 lead headed into the fourth. Perez and the Lions struck back as threw a 52 yard strike to Darby Smith to put the Lions back up. On the next possession, Danny Huckaby recovered a fumble in the end zone and put the Lions up 38-30 with just over 4 minutes to go. Kingsville got the ball and literally ran down the field and scored to pull within 2. The 2 point conversion attempt failed, leaving it to an onside kick to extend the game. The Lions recovered and on what should have been the final play of the game for kneel down, The Lion snapped shot backwards and was recovered by the Javelinas. Nobody could figure out how that happened until video evidence surfaced the next week showing the Kingsville nose guard slapping the ball the second it was snapped, causing the error. However, the officials did not call it and the Hoggies got the ball deep into Lion territory, but was called back to the Lion 35 when an unsportsmanlike penalty was called. The Javelinas could do nothing on three straight plays, setting them up for a 55 yard attempt at the win. Lion defender Hatari Byrd crashed through the line and blocked the kick, and the Lions escaped with a 38-36 win.

Heading into the next week, Colby Carthel decided to discipline some players for the unbelievable amount of unsportsmanlike conduct penalties the Lions had received. Benching a handful of players for the next game against Oklahoma Panhandle State, TAMUC travelled west to face their new LSC foe and it was clear from the start the Lions had the game in hand as they led 35-0 at the half and cruised to a 35-13 win over the Aggies.

The next week was Midwestern State. Hosting the Mustangs in front a nationally televised audience via ESPN3, the top two teams of the LSC did battle for King of the League. The two teams exchanged body blows and went into the half with the Lions up 12-7.

After MSU Scored to make the game 13-12, the Lions poured on the points, scoring 13 straight to put them up 25-12 with just under 4 to go. The Mustangs took the ball and rushed down the field and scored quickly. Deciding not to onside the ball, MSU pinned the Lions back deep. Going into a prevent mode, the Lions simply rushed the ball twice and then stopped the clock on a dropped pass that would have been a first down, forcing a punt. Hector Dominguez nailed a fantastic kick to put the ball at the Mustangs own 25 with just under 2 minutes to go.

At this point, the momentum switched totally to MSU who moved the ball down in only 1:31 and scored with 28 seconds left. The Lions tried to get something going with no timeouts, but the Mustangs completed the comeback and handed the Lions their first loss of the season 26-25.

Taking a long trip to Sliver City, New Mexico, the Lions played a very sloppy game but were able to defeat their opponents on skill alone in a 38-24 win. The next week would show if the Lions were really LSC title material, but that seemed not to matter as at the point, they were playing for second.

That changed the next week as the Lions routed Angelo State 62-14, and that same night in Canyon, Midwestern Fell to West Texas A&M 35-27, the same team the Lions would welcome for Homecoming the next week.

Nearly 10,000 fans saw the Lions shut out the Buffaloes of West Texas A&M 36-0 in a game where all 3 sides of the ball played to near perfection. It also gave the Lions control of their own destiny again. If they won out, they would at least tie for an LSC title and now the playoffs were the focus.

TAMUC would visit West Texas yet again, this time Odessa’s famed Ratliff Stadium facing first year program and LSC foe Permian Basin. In a game that went well into the night due to weather, the Lions made quick work of the Falcons 58-21. It all came down to the season finale against rival Tarleton State.

Prior to the game, news was coming from Wichita Falls that Midwestern had fallen at literally the last second to Eastern New Mexico, meaning that a win gave the Lions their third straight unshared conference title. After staring off slowly, the Lions roared back and won in a convincing manner against a Tarleton team that had drastically improved. Lifting both the LSC title trophy and the President’s cup, it was a fantastic end to a season that was nearly perfect. At 10-1, the Lions waited to see if they would be hosting or would be traveling.

Playoff Football Returned to Commerce for the firs time since 1991.

The Lions drew the 4th seed and hosted RMAC Champion Colorado-Mesa. Playoff Football had returned to Commerce, and the Lions did not disappoint as they ran out to a big lead and never trailed, defeating the Mavericks 34-23. In a twist of irony, The Lions would travel the next week to take on Grand Valley State, the first team they had played in the NCAA playoffs 26 years ago. On top of that, the Lions also had their first Harlon Hill Award nominee since Gary Compton in 1990. Luis Perez was nominated for the award that goes to the best player in all of NCAA Division II football. 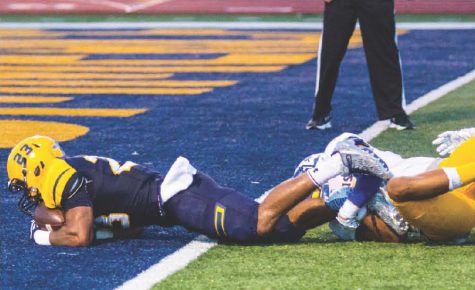 Richard Cooper was a cut above the rest his time in Commerce.

Traveling to Lubbers Stadium in Allendale, Michigan, the Lakers of Grand Valley State showed from the start why they were the number 2 in the country as they jumped out to a 17-3 lead. The Lions made a late run to cut the deficit to 7 in the early third, but GV did just enough to keep the Lions down as they prevailed with a 55-32 win with two late scores to end the Lion’s season.

With an 11-2 mark, it was the best season in over 2 decades. With a plethora of awards and records set, the 2016 Lions gave their fans more reason to look to the future with enthusiasm, and with the 2017 campaign kicking off in just over 2 weeks, it looks to be another season filled with promise. 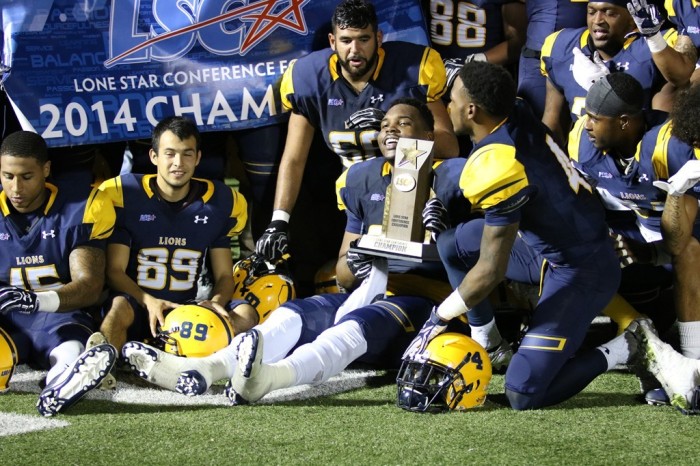 Highest Ranking in the AFCA Polls since 1991.