After the breakthrough season of 2014, expectations for 2015 were measured and tempered based on what the Lions had coming back and what they had lost. Two of their best wideouts had gone to the NFL along with their starting tailback. Though there was bevy of talent waiting in the wings, the Lion faithful were keeping a cautious eye on them, mainly a former Division I quarterback who had journeyed up and down the Western United States before finding a home in Commerce.

The conference coaches picked the Lions to finish second overall, behind Angelo State. The taste of the bitter loss to the Rams in the Conference playoff Championship still lingered. ESPN picked up on that and decided to televise the match-up in October as part of their small college showcase. There was great reason to be hyped in Commerce, but again, it was a measured sense of excitement.

On offense, there would be a new set of faces in the starting lineup. Lance Evans and Darby Smith both took on new starting roles along with Miami transfer Derrick Macon. John Thomas and Chris Chumley split time at the A-Back position and a Junior coming into his own in Richard Cooper would take over at tailback. It was a talented but young and mostly untested group. 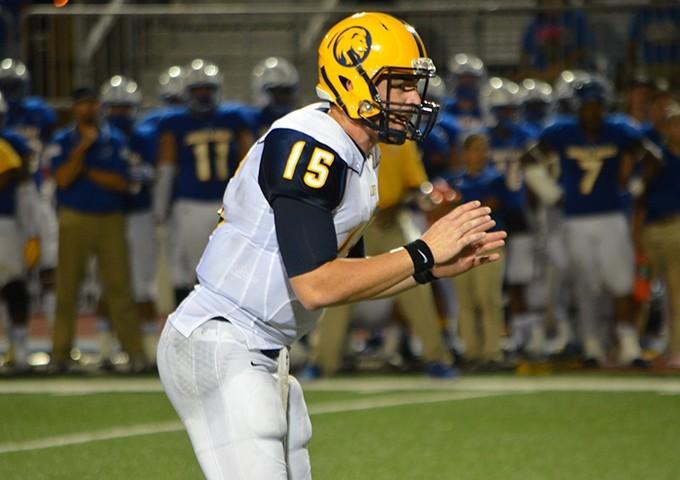 The biggest question would be Harrison Stewart. Stewart had QB’d the Lions during the second half of the 2013 season due to Rollison’s injury and had beaten a ranked Tarleton team and a Division I team. Stewart was different than his predecessors in that he was big bodied, had a different type of arm strength, and liked to go vertical on his throws. Having redshirted the previous year, Stewart had picked up on the Lions offensive system even more than he had coming in as a transfer from California.

The defense appeared to be very solid with many returning starters coming back and new starters coming in with multiple reps in game time. Like the offense, it had a few key cogs but would have some serious playmakers.

Kicking off the season in Commerce, the Lions welcomed RMAC opponent Adams State from Colorado. After a less than ideal start TAMUC  rolled to a 48-17 win over the Grizzlies. The next week the Lions hosted a top ten Delta State team. The game was full of big plays and a ton of offense. Delta State scored with under 2 minutes to go and the Lions had one final chance and drove the length of the field for one last shot at the end zone, but John Thomas could not handle Harrison Stewart’s pass as time expired and the Lions dropped a heart breaker to the Statesmen, 51-44.

LSC play started with the Lions visiting Texas A&M-Kingsville. For the fourth straight season, the Lions took the Chennault Cup home as they defeated an improved Javelina team 37-17. Returning home to take on Eastern New Mexico and their triple option offense, the Lions stumbled out of the gates early but got their offense revved up just enough to overpower the Hounds and the defense made key stops to keep the ENMU offense off the field in a 42-31 win. It was also the return of the throwback EAST TEXAS jerseys as they made their debut for the first time in the Carthel era.

The emergence of All-American Running Back Richard Cooper, and the re-emergence of the East Texas throwback jerseys made 2015 an exciting season.

The next matchup featured the President’s Cup rivalry against Tarleton State in Stephenville. From the start the Lions completely overpowered a hapless TSU team shutting them out 63-0. The next week in front of a nationally televised audience on ESPN and a rocking Memorial Stadium crowd, the Lions took down Angelo State 38-35 in a battle of ranked teams. It was the win that the Lions needed to catapult them into the national spotlight and also into the national title conversation.

The Lions traveled to the South Plains to face West Texas A&M in Canyon for the second time under Carthel. The Lion offense was methodical and efficient and the defense kept the Buffalo offense at bay as they won for the first time in Canyon in many years with a 38-20 win. With a 5-0 conference record, the Lions would face Midwestern State at home for the Conference Championship. 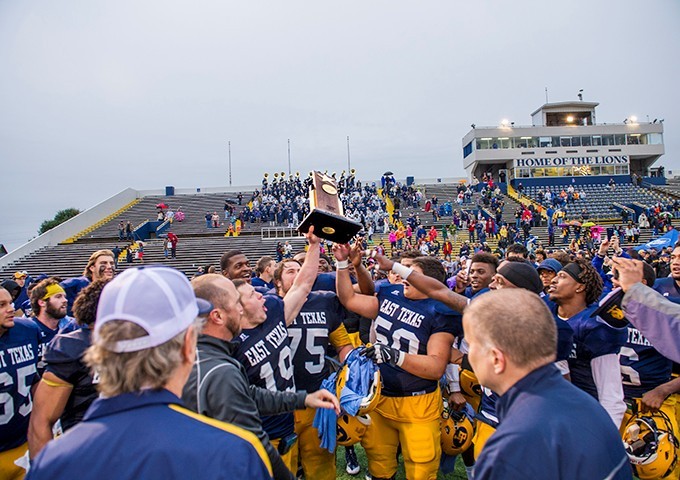 For the first time since the late 50’s the Lions won back to back LSC titles.

On a rainy and cold day, the Lions raced out to a 17-0 lead at the half and held off a MSU rally to hold on and defeat the Mustangs, avenging their loss from the previous season as the Lions claimed the Lone Star Conference title for the second straight season in Commerce. With a 7-1 record and an undefeated record in Conference play, the Lions still had some season left with some critical games ahead.

The weekend of Halloween saw the Lions head to Huntsville, Texas for the first time in a very long time. The Bearkats of Sam Houston State had moved up to Division I-FCS years earlier and had been a major power in the FCS scene. They had defeated some very good Division I teams and had won National titles. The Lions had finally broken into the top ten, checking in at number 8, while SHSU was also number 8 in the FCS. Nobody expected TAMUC to make this one even close, and for a while it was not. The Bearkats raced out to a 24-3 lead, but then Harrison Stewart’s arm came alive and at the start of the fourth quarter, Stewart hit Lance Evans for a 24 yard strike to tie the game at 24. The score sent the Commerce fans into a frenzy and the Lion sideline erupted, while the SHSU fans sat in stunned silence. Hoping to seize on that momentum, Colby Carthel decided to gamble on the kickoff by going for an onside kick, but the Bearkats recovered and scored on the ensuing possession and pulled away from the Lions for a 38-24 final. The Kats and their fans both gave praise to the Lions for their performance. One SHSU radio commentator said: “The Kats just a beat a team that might be the best in all of Division II, certainly in Texas.”

The Lions made some big plays when they needed to in order to clinch a spot in the NCAA Division II Playoffs.

Despite the loss, the Lions were emboldened over going toe to toe with a powerful DI opponent and almost winning. They would need it, as the conference tournament (known by critics as the “circular firing sqaud”) was starting.

At 7-2 overall, the Lions once again had the top seed and home field advantage. Their first opponent was Angelo State. The Rams flustered the Lions the entire first half of the game and made things much harder when Kyle Washington ran in the ball from 8 yards to give the Rams a 28-10 lead early in the third, making the Lion crowd very nervous. On the ensuing kickoff, Richard Cooper took the return 88 yards for a score sparking life back into the struggling Lion offense. The Rams went 3 and out on the following drive and Harrison Stewart hit Darby Smith for 36 yards to pull the Lions within 5, but the Rams responded in under 2 minutes with a score putting them up 35-23 with 3:27 left to go in the third. The Lions responded again as the Lions offense was now humming along as Derrick Macon snagged a 3 yard TD pass from Gabe Rodriguez to pull the Lions within 5 to end the third. With 7 minutes left in the game, Darby Smith once again snagged a Stewart pass and took it 25 yards to the end zone to put the Lions up by 1, 36-35. The Rams marched down the field and facing a 4th and 1 with under 2 minutes to go, The Rams went for the score but Lion D-Lineman Tyree Barton stuffed Washington at the line, turning the ball back the Lions. 2 plays later Richard Cooper exploded for a 50 yard run and the Lions ran the clock out to head back the LSC playoff championship game. This time, it would be Midwestern State.

In front of a large crowd of Lion and Mustang fans, both squads went head to head with each other trading leads until the fourth, when the Lions scored back to back touchdowns to lead 33-24 with just under 6 minutes remaining. The Mustangs went a quick 3 and out and the Lions got the ball back and decided to go into clock killing mode. It was as good a bet as any, but Richard Cooper uncharacteristically fumbled the ball right after picking up a first down that would have kept the clock running and the chains moving. MSU immediatly responded by scoring a touchdown on their first play to pull within 3. The Lions got the ball back but committed another very costly turnover again, as Harrison Stewart rolled to his right to avoid a drive killing sack and threw a pass that was intercepted and taken back for a touchdown. In a span of under 2 minutes, the Lions went from totally in control to losing the LSC playoff finale in a 37-33 heart breaker.

Despite the 8-3 record, the Lions had little doubt they would get into the playoffs, they just had doubts they would host a game. Hoping for a bracket that would give the Lions a rematch against Midwestern in Wichita Falls, they drew the number two team in the country, Ferris State.

Headed into the NCAA playoffs for the first time in 20 years in less than ideal conditions, it appeared that Bulldogs would dismiss the Lions in a route, but a blocked extra point that was returned for a score flipped the script, at least temporarily. The Lion offense started to click and led the number 2 team in the country 16-13 going into the half. However the second half was a totally different story as FSU showed why they were as good as they were by outscoring the Lions 35-14 in the second half, aided by numerous Lion turnovers to defeat the Lions 48-30 to end the season at 8-4 overall, 6-0 in conference, and 11th in the country. 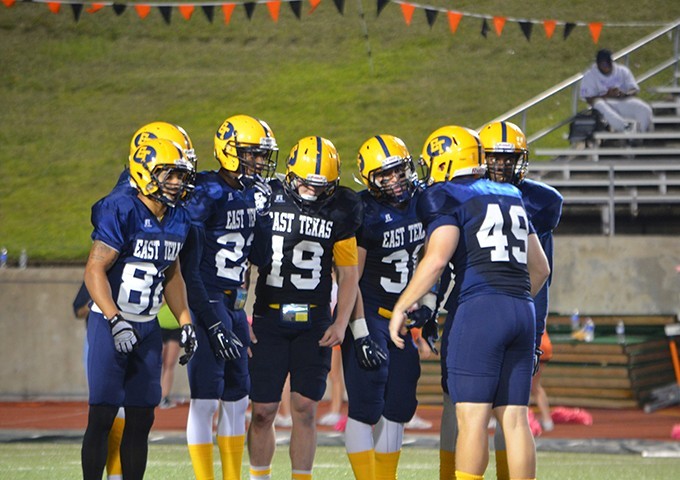 The 2015 TAMUC Lions paid homage to teams of the past and the tradition of the school by sporting the ET thowbacks 3 times during the season.

The season was a breakthrough on many levels. It was championship number 24, and for the first time since 1990, the Lions had gone undefeated in LSC play and returned to the NCAA Division II Playoffs, their first appearance since 1995. The Lions also led the conference in scoring offense, total offense, and scoring defense.