In the late 2000’s, A&M-Commerce Football showed some signs of life and positive movement. After the 2007 season, winning was not just going for average anymore, but the athletic department tried to take an approach of making things “big time” in Commerce. Calling it the “Restore the Roar” campaign, Carlton Cooper, the new athletic director wanted to re-brand TAMUC athletics with big name hires. He had his chance when he decided to dismiss Scott Conley in 2008.

Dr. Dan Jones had become President of Texas A&M-Commerce and both he and Cooper decided on former Kentucky and Baylor Head Coach Guy Morriss to be the Lions next head coach. It seemed to be a good fit. Morriss’s father had played for ET and had graduated from the school. He knew the tradition, and he could raise funds and recruit. Baylor had massively improved it’s facilities due to his fundraising ability and he had kept Kentucky’s fan enthusiasm even after the program became sanction riddled after the Hal Mumme era. Morriss also had the reputations as a true “player’s coach.”

Morriss was an Air Raid offense disciple, but also believed in running the Football and combining a power game with a controlled but potent passing attack. He had recruited a good Freshman class but had to see how they would mesh into his system. His defense seemed to be pretty set from the solid defenses that had been recruited by Scott Conley, he just needed an offensive trigger man. He found that in University of Maine Transfer Adam Farkes.

The Lions opened the 2009 season with both new offensive and defensive game plans. A road trip to San Angelo to open the season saw the Rams keep the Lion’s new offense completely confused and off balance as they downed the Lions 21-7 in the season opener. The next week was a much tougher game taking on Division I Southeastern Louisiana. The Lions could get absolutely nothing going on offense and they paid for it in the form of a 41-7 loss.

In week 3, the Lions took on the number 1 team in all of Division II, long time rival Abilene Christian at the Cotton Bowl in a rainy game. TAMUC forced 2 ACU turnovers, and then The Lions marched down the field riding the arm of  Farkes getting all the way down to the 3 yard line before a Blake Patton fumble knocked the momentum out of the Lion’s favor. The squads went into the half tied 0-0.

ACU got on the board in the third quarter on a Darrell Richardson 4 yard run to make the score 7-0 ACU. The Lions went 3 and out on their next series and ACU started to drive on the Lions again, but it was defense to the rescue. ACU’s Zach Stewart was picked off by Corey Whitfield, who raced to the end zone untouched to tie the game at 7. ACU scored with just over 4 minutes to go, but the Lions went on a game tying drive that was topped off by a 20 yard strike from Farkes to Taylor Fore with 32 seconds left. The Lions had the number one team in the country on the ropes, and many people thought Morriss would go for two as he had done 5 years earlier while at Baylor when he beat a ranked Texas A&M team. Not this time. Overtime started and the Lions took the ball. Farkes fired a screen pass that was tipped and ACU’s Drew Cuffie stumbled 60 yards to return it for a score. After the game Morriss was asked if he could have done anything different, he shrugged his shoulders and said; “Should’ve gone for two.”

The Lions traveled west to Blackwater Draw, New Mexico for a date with Eastern New Mexico. In a game that was the polar opposite of the ACU matchup, the Lions and Greyhounds traded scores the entire game. The Lions tacked on a season high 56 points, but the bad news was the Greyhounds scored 76 as the Lions dropped to 0-4 and the fan base, already upset at the way Conley had been dismissed, started to grumble about the direction they saw the Lions going under Morriss.

After the start Morris stated that his team “had an identity crisis.” They needed to play great defense the same time as they would execute on offense. Morriss had an idea as to how he could bring some of that identity back. 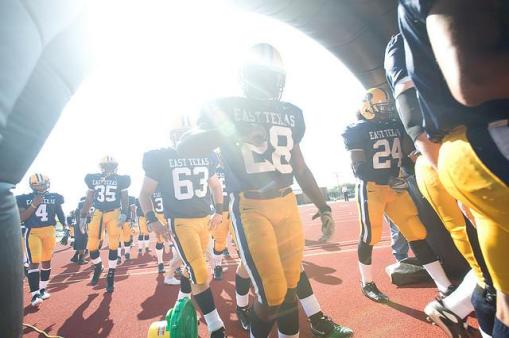 Guy Morris brought the idea of wearing ET throwbacks to energize the fanbase and the team. It worked.

Hosting Central Oklahoma in Commerce, the Lions walked out to the field with EAST TEXAS strapped across their chest, a complete surprise to the fans. The fans roared with excitement to see the ET helmet decals and the names of Alma mater dear on a uniform for the first time in 14 years. It also helped the Lions as they picked up their first win of the year 27-23 over UCO. The fans loved the display of the appreciation for the history and traditions of Lion Football. The next week saw the Lions win again as they soundly defeated Northeastern State 27-12. The defense was coming together and Morriss saw his offensive plan of attack moving in the right direction with the ability to score and also the ability to control the clock through the air and the ground.

Homecoming of 2009 saw another tough Texas A&M-Kingsville team visit Commerce. With the EAST TEXAS strapped on their chest, the Lions put up a fight nobody expected them to even be in, but in the end, the Javelinas had just a little bit more as the downed the Lions 35-34. After the school song was playing as the Lions faced the crowd clearly dejected, the crowd rose and gave the team a standing ovation for their hard play and spirit.

The final home game of the year saw the Lions take down East Central Oklahoma on Senior Day 31-28. Having pushed their record to 3-5, they were also 3-0 in North Division play. Once again, they were in the running for an LSC Division Title. The final two games would be on the road in Oklahoma. TAMUC took the short trek up Highway 11/78 to Durant to take on Southeastern Oklahoma State. In a battle more defensive that offensive, The Lion offense did just enough to hold off the Savage Storm and defeated SEOSU 27-17.

In the season finale, the Lions traveled to Weatherford, Oklahoma to face Southwestern Oklahoma. The task was very simple, win and claim the LSC North outright and end the season with a 5-1 record after the disappointing start and be undefeated in Division play. The Lions struggled all day long but came through when it mattered and held off a late SWOSU drive to win the game and the Division outright 15-12. The Lions finished the season with a 5-1 record in the backstretch and a 5-0 record in LSC North Play. 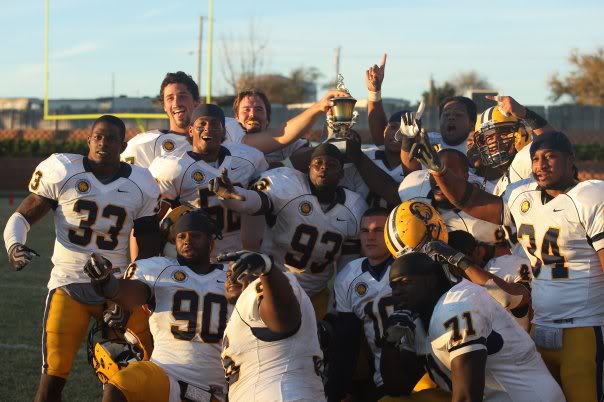 The Lion Seniors celebrate winning the LSC North for the second time in 3 seasons.

LSC Coach Of The Year-Guy Morriss