In the 1930’s winning was the name of the game for the ETSTC Lions. Bob Berry’s teams continued to be a potent force in the Lone Star Conference and in the entire country, and heading into the ’38 season, the Lions were expected to once again have a tough defense that few would be able to score on, but the offense continued to improve as the Lions were getting accustomed to Berry’s version of the Power T-Formation. 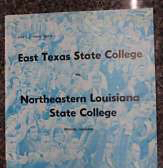 Opening the season in Natchitoches, Louisiana, The Lions posted a 19-6 win over Northwestern Louisiana State. For the first time in school history, the Lions faced the Buffalos of West Texas State College (now West Texas A&M) and faced them in Commerce. The Lions took down the Buffs in 21-20 slugfest, and then followed up with another close win against Stephen F. Austin in Commerce 7-6. The Lions took a trek down to San Antonio and once again took down the Tigers of Trinity College 26-6 heading into the second half of the season.

Undefeated heading into the second half, the Lions took a trip to the Big Country to face off with defending Border Conference Champions Hardin-Simmons. The Lions had been downed the previous year and history repeated itself as the Cowboys choked the life out of the Lion’s offense and scored the most points on the Lion defense all season and all decade. The Lions rebounded with a win over LSC foe Sam Houston State in Commerce 14-6 and then notched a huge win over Southwest Texas 27-6 setting them up with another end of the year game against rival North Texas for the conference championship.

In a defensive battle, the Lions once againe claimed a conference title by downing their North Texas rivals by holding the Eagles to a field goal and notching a 7-3 win and the Commerce fans celebrated in Downtown Commerce that night and the Victory Bell was brought College Field was rang for every time the Lions had scored that year. With one game remaning that had no conference title implications, the Lions hosted Northwestern Missouri State and routed the visitors 53-0 to cap off another fine season with an 8-1 overall record, and another undefeated conference record. It would be the last conference title of the decade for the Lions, and with war looming in Europe, it would be the last title team that Berry would coach in years.