A lot of thoughts to put down, so let’s get to it. 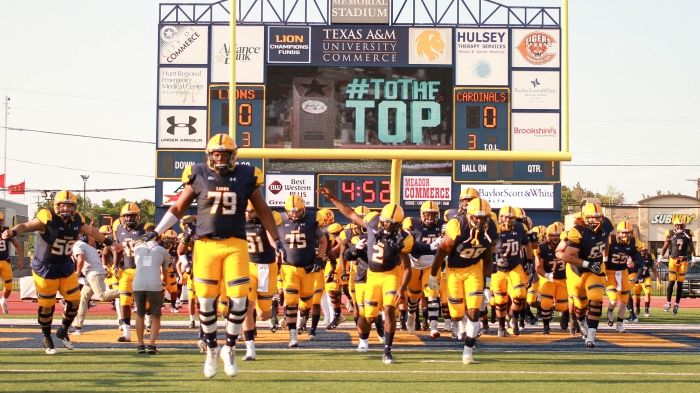 `1. Surreal. That is the first and only word I can use. It was just five years ago that I was sitting in Memorial Stadium watching the Lions get pummeled by West Texas A&M. There were MAYBE 500 people in the entire stadium, and most of them were WT fans and parents of Seniors that were playing for the Lions. I knew that changes were coming because there was a new athletic director being hired, and had heard Guy Morriss was going to resign after the game. It was a 1-9 season and it was hard to see anything getting a lot better. Then before you knew it, The Lions were a 7-5 team with a Bowl berth, a 9-3 Conference Champion team with a Bowl Win, an 8 win defending champion that was in the NCAA playoffs again, and a 10 win season, a conference title and a decent playoff run. 5 years ago, and today, the Lions will be playing for the National Championship. A so much of that was due to the dearly departed Dr. Dan Jones, who would have had a huge smile on his face after this one, and Ryan Ivey for his short but so very important time in Commerce. Those two men had every bit a hand in this moment.

2. Fortune Favors The Bold-Colby Carthel placed a huge wager to get momentum back for the Lions. Game is tied at 7, the offense is sputtering. Time to call a fake punt. At your own ten, and putting the ball in the hands of a true Freshman punter and a back-up tight end. They ran it, and it worked. 6 plays later, the Lions are back on top with all the momentum. THAT SINGLE PLAY set the tone for the rest of the game. With Colby Carthel, there are no “gambles”, there are simply educated risks. The play call at the end of the game was a fantastic play call by Matt Storm. Everyone thought that they would try to run the clock. They did not. They scored and punched their ticket to Kansas City.

3. Luis Perez.…played his best and most complete game since donning a Lion uniform. IF the Harlon Hill committee wants a case for Perez winning their award, he made it yesterday. He stepped up and made big play after big play, and his decisions to tuck it and run to gain the first downs and not turn the ball over. His throws that were incomplete were not in any danger of getting of getting intercepted. The best pass he threw was to Kelan Smith, who had a great game but dropped a touchdown pass. Still, the guys on ESPN were amazed at the pass, the color commentator saying something like: “there is not another passer in Division II who could throw that pass.”

4. The Defense stepped up today and really rose to the occasion. I believe that Harding probably got thrown behind the line more times than they, or anyone else expected. The corner blitzes were a master stroke of play calling by Justin Deason. The assignment defense was superb, and if you take away the explosive at the beginning of the game and the short field Harding had to work with that scored their second TD, the Lion defense only held the Bison to 3 points on sustained drives. That was the tale of this game.

5. History-The fact that the game was played on Ernest Hawkins Field in Commerce, 45 years from the day that the Lions won the NAIA National Title in 1972 shows that History is funny, and yet poetic. Dudley Slice, a Receiver on the ’72 team and various other Lions of the past expressed to me how much they want to see this group of guys loft the trophy. Biggest crowd in school history, in front of a national TV audience, and Memorial Stadium never looked so beautiful from the television screen, and major props to the Athletic Department and AD Tim McMurray for making our campus so appealing to a TV audience. You have few days in this life where everything comes together like it did yesterday, enjoy them at the present and remember them in the future. It was a special day.

6. Finally, this game was not just for this group, but the fans who endured years of rough Football. The coaches who have toured the state and worked relentless hours to get a great team on the field. It was for the guys like the Blake Coopers, the Bobby Bounds, The Gary Comptons, the Billy Watkins, Cary Noiel, Wes Smith, and various others who have stood by this program and bleed with it. This is for the Community members who still wake up and bleed the blue and gold every day, who love the alma mater, the school, the town, and everything being a Lion represents. The students rushing the field and calling the roll with the team, all with Ernest Hawkins in the center leading it showed the entire country what “ALL HAIL TO ET!” means.