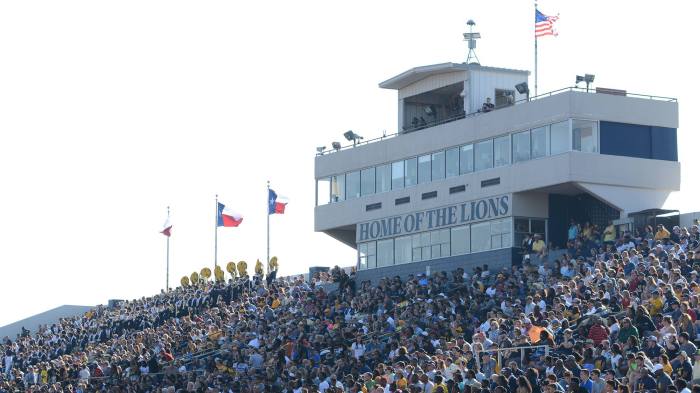 Well, Lion fans, it did not go our way today, but there is reason for optimism in Commerce, America.

The Lions came into this season with a new and unproven staff, and were forced into starting a red shirt sophomore at quarterback that could very well turn out to be a team MVP.The offense was today down to starting one of their best defensive backs and a true freshman at running back.

On the bright side, the offensive line comes back intact. Miklo Smalls will have a full year in Billy Riebock’s system, and will be armed with the confidence of knowing that he is the man under center. Kelan Smith shook off his sophomore slump and had a fantastic year. Chance Cooper returns, and the future is bright for Jeremiah Bridges and Christian Brewington. Drake Flores showed flashes of brilliance at tight end, and has the size of Guice and Lion legend Vincent Hobbs.

The Lions came farther and faster than anyone, including the staff here at The Wire thought they would. There were so many questions, the biggest of which began a little over a year ago. Just who was David Bailiff and what would he do? Billy Riebock, Xavier Adibi, who are these guys? Will the team buy what they’re selling? The defense has their third coordinator in as many years. We’ve been throwing the ball so much, are we just going to run it all the time now? There were so many questions.

The answer was yes. The offense became more balanced and difficult to defend. Defenses had to account for Miklo Smalls. Antonio Lealiiee, Jemal Williams, and Spencer Long not only filled in the running back position, they thrived. Dominque Ramsey showed to be a true triple threat, seeing action on the offensive side of the ball.

Defensively, the Lions just got better all year, earning the “Blue Gang” moniker that defined the 1972 National Champions. Elijah Earls was a surprise at defensive end, and Mark Brown showed flashes of dominance. Alex Shillow, Kader Kohou, were just brilliant. In this day of spread offenses, and four and five wide receiver packages, the Lion back line just continued to adapt.

The biggest surprise, though, had to be head coach David Bailiff. It was easy at the beginning of the season to discount him, if you just look at what happened at Rice. Lion fans found out things were much different.

I wrote back in August that Bailiff was soft spoken, but ran a very tight ship. He demanded excellence, and held people accountable. He took over for a very popular and well loved coach, and faced a spoiled fan base that was used to winning. He accepted that challenge, embraced the culture, and added to it. It was the little things, like taking popsicles to the Lion Pride Band during August practice. He took time to tailgate with alumni at the National Championship game. He attended Lion legend Wade Wilson’s funeral during the height of recruiting season. Well done, sir.

So, yes, Lion fans, despite the day’s disappointment, there is a very bright future. Many good players come back, and there is a great deal of talent in the pipeline. And if there is one thing for certain, David Bailiff can recruit.

Later this winter, I’ll have a break down of what went right on both sides of the ball, and what didn’t go so well. For now, though, Lion fans, you can smile through the disappointment of a season that ended too soon, knowing good times lie ahead.